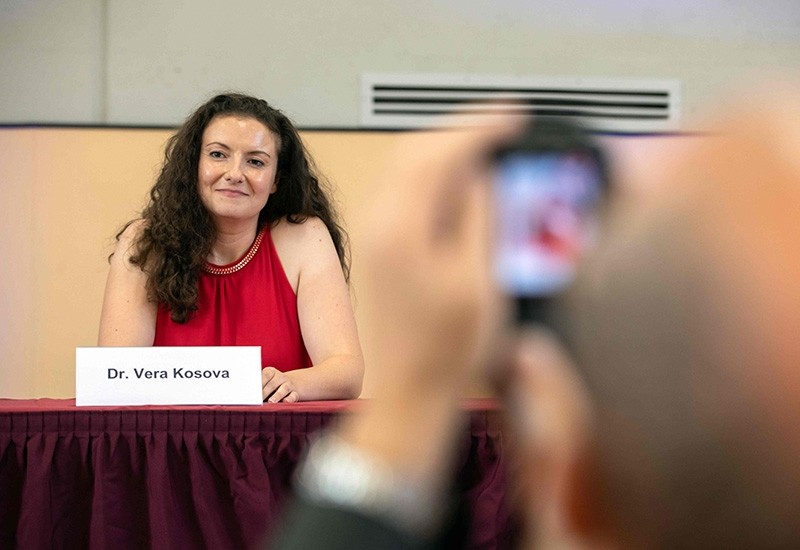 Vera Kosova smiles after she was elected chairwoman of a new Jewish grouping within Germany's far-right AfD party during the group's founding event on Oct. 7, 2018, in Wiesbaden, western Germany. (AFP Photo)
by French Press Agency - AFP
Oct 07, 2018 12:00 am

Germany's far-right party AfD on Sunday launched a "Jewish" group within its ranks which it says will battle against mass immigration of Muslim men with anti-Semitic views, sparking an outcry.

The party said a group of 19 have formed "Jews in the AfD," and that anyone joining must be a card-carrying member of the party who is either ethnically or religiously Jewish.

The move drew a backlash from Germany's Jewish community, which blasted the AfD as a "racist and anti-Semitic party."

Some 250 people, many from Jewish organizations, also held a protest Sunday in Frankfurt against the new group.

"You won't get a Kosher stamp from us," said Dalia Grinfeld, who heads the Jewish students Union in Germany, at the protest.

Leading members of the AfD have come under fire repeatedly for comments that appear to play down the Holocaust.

Party co-leader Alexander Gauland in June described the Nazi period as a mere "speck of bird poo in over 1,000 years of successful German history."

Another leading AfD politician, Bjoern Hoecke, has criticized the sprawling Holocaust memorial in Berlin, branding it a "monument of shame."

Ahead of Sunday's launch, Jewish organizations including the Central Council of Jews in Germany issued a statement condemning the AfD.

"The AfD is a party that provides a home for hatred for Jews as well as the relativizing, or even denial of the Holocaust," it said.

Taking aim at the Central Council of Jews, von Storch compared it to "official churches", which she dismissed as "part of the establishment."

The AfD positions itself as a group offering voters an "alternative" to mainstream established parties.

Capitalizing on discontent over an influx of asylum seekers in 2015-2016, the AfD is now the biggest opposition party in Germany with over 90 seats in parliament.

"Whoever calls the Holocaust a speck of bird poo in German history does not fight anti-Semitism, but mocks its victims, and definitely does not stand on the side of the Jews," Harbarth told Sunday's edition of daily Bild.