Thousands rally through Edinburgh to back Scottish independence as Brexit looms 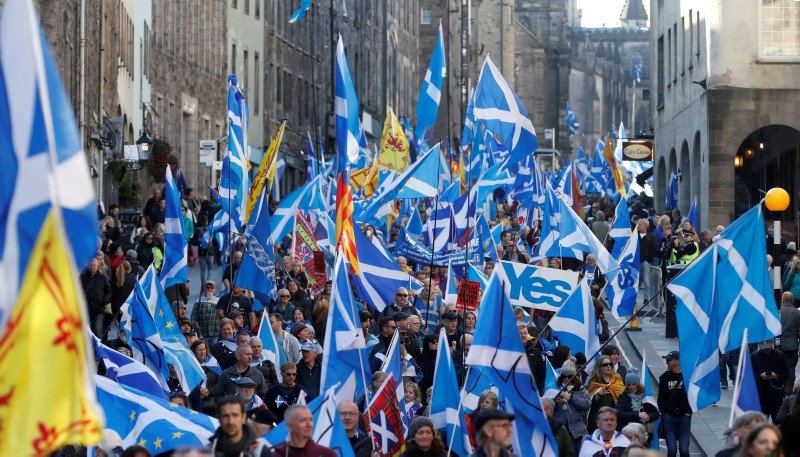 'All Under One Banner' pro-independence protesters take part in a march and rally in Edinburgh, Scotland October 6, 2018. (Reuters Photo)
by Compiled from Wire Services
Oct 07, 2018 12:00 am

Some 20,000 people marched through Edinburgh on Saturday calling for Scottish independence, officials said, less than six months before Britain's planned departure from the European Union.

Scottish National Party (SNP) leader Nicola Sturgeon has pledged to outline her plans for another independence referendum "when the terms of Brexit become clear".

An announcement was widely expected at the party's conference next week, but with Brexit negotiations between London and Brussels deadlocked she has warned she may delay her plans until later in the year.

Voters in Scotland backed remaining in the EU by a significant margin in the 2016 referendum and Sturgeon has remained a vocal opponent.

Prime Minister Theresa May has refused to permit another independence vote, which must be authorised by parliament in London, complicating Sturgeon's desire to stage a poll before Britain is due to leave the EU next March.

Scottish police said in a statement that 20,000 people took part in Saturday's march, based on City of Edinburgh Council estimates.

The campaigners waved giant blue Scotland flags and sported kilts as they congregated in a park near the Scottish Parliament building.

Pressure group EU Citizens for an Independent Scotland, who fear many Europeans will leave Scotland before they get a chance to vote for independence, were among those at the rally.

"We can't stop Brexit, we can't help what is happening with the UK, but we can help with what we are doing here in this country with independence."

Representatives from English Scots for Yes, a group set up to dispel the notion that Scottish nationalism is 'anti-English', were also present.

"People who say that we're anti-English in some way are, quite frankly, ludicrously stupid," its national director Math Campbell, 31, originally from Cambridge, told AFP.

Nationalists gathered in Holyrood Park in the shadow of the devolved parliament, defying a warning from local authorities that the rally was unauthorized.

Historic Environment Scotland, the custodian of Scotland's parks, refused to issue a permit for the rally, insisting it does not allow demonstrations of a political nature.

However, organizers were emboldened when Police Scotland said they would only enforce public order laws prohibiting unlawful gatherings if safety was at risk.

A small counter protest featuring union flags on the city's Royal Mile led by A Force For Good, British unionist organization, was drowned out by thousands of nationalists waving the Saltire, the flag of Scotland.

The SNP, which backs secession from the U.K. and has almost half the seats in the country's devolved parliament, starts its annual conference on Sunday.

The Brexit process has since put Scotland's devolved nationalist government increasingly at loggerheads with the U.K.'s Conservative leadership.

Scotland rejected independence by a 10 percentage point margin in a 2014 referendum.

Most polls show public support for Scottish independence from the U.K. stuck at the same 45 percent level it has been since the 2014 vote, although a recent poll showed backing for a split from the U.K. has ticked up in a sign of discontent over Brexit.