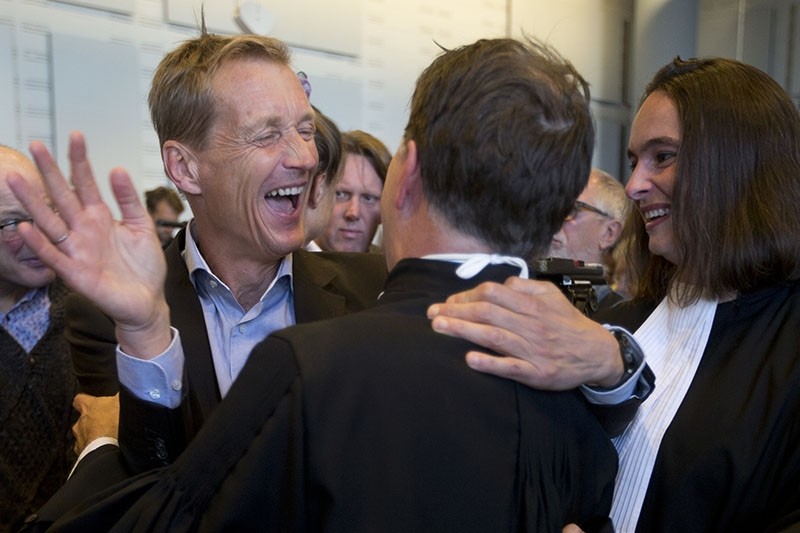 Supporters congratulate Urgenda's legal team after the court upheld a 2015 landmark ruling ordering the government to cut the country's greenhouse gas emissions by at least 25 percent by 2020, in The Hague, Netherlands, Oct. 9, 2018. (AP Photo)
by French Press Agency - AFP
Oct 09, 2018 12:00 am

The Dutch government on Tuesday lost a legal appeal against a landmark court ruling which ordered it to slash greenhouse gases by at least 25 percent by 2020.

The Hague appeals court upheld a 2015 court victory by environmental rights group Urgenda, which sought to force a national reduction of emissions blamed for global warming.

"The state is acting unlawfully and in violation of the duty of care," the ruling said, according to the Dutch news agency ANP.

The government had argued that "because the court made a policy and political choice" it had overreached its powers.

Urgenda hailed the decision, saying on Twitter: "The judge made mincemeat out of the state's appeal. A 25 percent drop by 2020 is only the minimum! The government needs to work!"

The group brought the case in April 2015 on behalf of some 900 Dutch citizens.

The court at the time found in favor of the rights group, exhorting the government to do more in a ruling handed down a few months ahead of the Paris Climate Agreement.

The appeals court ruling comes a day after the UN's Intergovernmental Panel for Climate Change (IPCC) said in a landmark report Monday that warming is on track toward an unlivable 3C or 4C rise and avoiding global chaos will require a major transformation.

The Dutch government has plans to close two of its oldest coal-fire plants by 2025.

Three remaining coal plants will have to shut by 2030, with the Netherlands committed to reduce carbon dioxide emissions by 49 percent by then.