Support for members of Germany’s ruling coalition falls to record low, minor parties on the rise 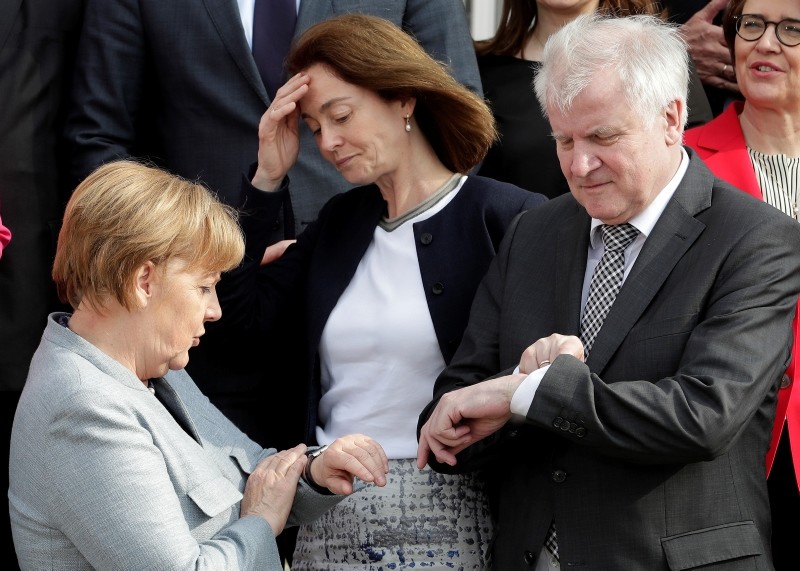 Chancellor Angela Merkel (L) and Interior Minister Horst Seehofer look at their watches after they and other members of the gov't posed for a group photo during a two-day retreat at the Meseberg Castle in Gransee, Germany, April 10, 2018. (AP Photo)
by Compiled from Wire Services
Oct 12, 2018 12:00 am

A poll by Germany's public broadcaster has shown that the support for Germany's mainstream parties, which are partners in Chancellor Angela Merkel's ruling coalition, have fallen to the lowest level in the last 20 years ahead of a crucial election in the country's largest and richest state, Bavaria.

When participants were asked which party they would vote for if there was an election tomorrow, the CDU got 26 percent, some six percentage points lower than the September 2017 federal elections. The SPD received 15 percent, 5 points lower than the elections, lagged behind the Greens and the far-right Alternative for Germany (AfD), which polled at 17 and 16 percent, respectively. The far-left Die Linke and liberal Free Democratic Party (FDP) polled 10 percent each.

Regulations on Germany's popular diesel engines proved dissatisfactory as 82 percent of the participants disagreed with them, while 73 percent found environment policies not satisfactory.

Some 78 percent said the government failed to keep rents at affordable prices.

Greens rise as a serious alternative

While other mainstream political parties in Germany flounder in polls and struggle to answer to a far-right challenge, the Greens have gained strength as a magnet for liberal-minded voters.

Offering a compassionate approach to migration, a pro-European Union stance and an emphasis on fighting climate change and protecting biodiversity, the party appears poised for an unprecedented second-place finish in traditionally conservative Bavaria in a state election Sunday. It is polling strongly ahead of an election in neighboring Hesse two weeks later.

The Greens have new, dynamic and relatively young leaders, a pragmatic approach that has made them a partner to parties from the center-right to the hard left in nine of Germany's 16 state governments, and clear stances on central issues.

Unlike its mainstream rivals, the party doesn't have to worry much about losing supporters to the far-right AfD, which entered the national parliament last year and has been the other main beneficiary as the government bogs down in infighting.

"They have settled pretty well into the big niche of higher-earning big city dwellers with global awareness," daily newspaper Sueddeutsche Zeitung wrote in an editorial.

The newspaper noted "they have an existential issue in climate protection" and said that they appear to be on the way to replacing the struggling SPD —Merkel's junior partners in an unhappy "grand coalition" government of Germany's traditional political heavyweights — as "a new major party."

The Greens' election slogan in Bavaria is "Give courage instead of spreading fear." Party co-leader Robert Habeck recently lamented a "brutalization of political discourse," adding: "We think the only way of answering that is to no longer let ourselves be driven by fear of making mistakes or by fear of AfD."

The Greens were keen to enter government under Merkel last year, although that required difficult compromises with her conservatives and the pro-business Free Democrats, both traditional opponents.

The Free Democrats pulled the plug after weeks of talks, but the Greens' willingness to govern appears to have paid off. National polls show their support as high as 18 percent, compared with 8.9 percent in the 2017 election.

The Greens' current flexibility would have been hard to imagine in 1983 when the Greens, then a protest party with a penchant for beards and sunflowers, first took their seats in the German parliament.

From 1998 to 2005, they governed Germany as the junior coalition partner to Chancellor Gerhard Schroeder, a Social Democrat. Joschka Fischer, a one-time left-wing militant and taxi driver, served as a popular foreign minister.

At present, the Greens are benefiting from the weakness of the Social Democrats, their traditional partners. They also partner with Merkel's Christian Democrats in four state governments. Those include southwestern Baden-Wuerttemberg, a traditional conservative stronghold run since 2011 by Green governor Winfried Kretschmann.

Even a coalition with Bavaria's hardline conservatives appears conceivable after the upcoming election Sunday. And, for now at least, there's little sign of long-standing internal tensions between the centrist "realists" who now dominate the leadership and left-wing "fundamentalists."

Manfred Guellner, the head of the Forsa polling agency in Germany, said about half of the party's current supporters are what he calls "new Greens," centrists who don't identify as left-wing in the same way as its traditional base.

"They can be kept if you keep to a pragmatic, rational style of politics," he said.

The Greens have seen a polling bubble burst before. Their ratings soared after the 2011 Fukushima nuclear disaster in Japan, but they emerged from the 2013 national election as the smallest party in parliament.

That followed a poor campaign remembered largely for a debate about the merits of introducing a "veggie day," allowing opponents to label the Greens as politically correct killjoys who would seek to ban everyday pleasures.

"If, like after Fukushima, discussions within the Greens begin again and the 'fundamentalists' gain the upper hand, this could fade away quickly," Guellner said.

The arch-conservative CSU that has ruled Germany's second-most populous state for more than 70 years has been battling to defend its cherished absolute majority in the face of a challenge from the anti-immigration Alternative for Germany (AfD).

After securing 47.7 percent of the vote at the September 2013 election, support for the CSU has slumped to a mere 32.9 percent according to a survey published Thursday by the Berlin-based pollsters Civey.

Meanwhile, the populist AfD is set to enter the parliament in Munich for the first time.

"There are signs that we will indeed see a major turnaround," said Munich-based political analyst Ursula Muench.

Civey sees the AfD garnering 12.8 percent of the vote with its party election posters calling for "Money for pensioners instead of illegal migrants" and "Islam-free schools."

"We are in a serious situation, not only for ourselves but for democracy in our state," declared CSU state leader and Bavarian Premier Markus Soeder at a party conference in a bid to fire up support.

With its dramatic mountain landscapes, fairytale castles, lederhosen and oompah bands, Bavaria helps to forge the global image of Germany. The buildup to the election has coincided with the Oktoberfest in Munich, which celebrates the state's beer-drinking tradition.

Home to corporate giants such as BMW, Siemens and Allianz, Bavaria is also one of Europe's major economies with its 12.9 million residents enjoying Germany's lowest unemployment rate (2.8 percent) and some of its highest wages.

The CSU has missed out on securing an absolute majority in the Bavarian parliament only once - in 2008 - over the last six decades.

Of the 18 parties contesting Sunday's election, 7 could end up in parliament.

As a result, the CSU could be forced into an uneasy coalition with the environmentalist Greens, which has emerged as the second major political force in Bavaria.

The other possible option is a three-way coalition with the Freie Waehler (Free Voters), which prides itself on offering a broad party platform, and the pro-business Free Democrats.

Success for the AfD, founded only in 2013, will mean it is represented in all of Germany's state parliaments barring one: the western region of Hesse, which goes to the polls in two weeks and is also expected to see AfD enter the legislature.

At a federal level, the AfD shot into the Bundestag in elections last year, becoming not only the first major far-right party to enter the national parliament but also the largest opposition party.

While a weakened ally is not necessarily good for Merkel in general, a bad result for the CSU could help her return some stability to her government after a year of political turbulence.

A humiliating result for the CSU could cast doubt on the future of her interior minister and national CSU leader Horst Seehofer, who has been one of the chancellor's major critics, notably on her liberal refugee stance.

The CSU leadership has already distanced itself from Seehofer, who at one point earlier this year appeared to risk the breakup of his party's alliance with the CDU over a migration dispute. The partnership has been a pillar of Germany's post-Second World War political life.

Since becoming premier in March this year, the 51-year-old Soeder has set about trying to counter the AfD's rise in the largely Catholic state by identifying strongly with the region's traditions and taking a tough stance on migration, which has topped the list of voter concerns.

Regularly decked out in traditional Bavarian jackets, Soeder has also incurred the wrath of secular Bavarians as well as the church after he called for crosses and crucifixes to be hung in the state's official buildings. The church criticized the state for misusing religious symbols.

Watching his poll numbers fall, Soeder may well conclude that his campaign has backfired. Indeed, many liberal Bavarian voters have abandoned the CSU and swung behind the more progressive policy stance of the Greens, who could end up being the real winners of Sunday's poll.