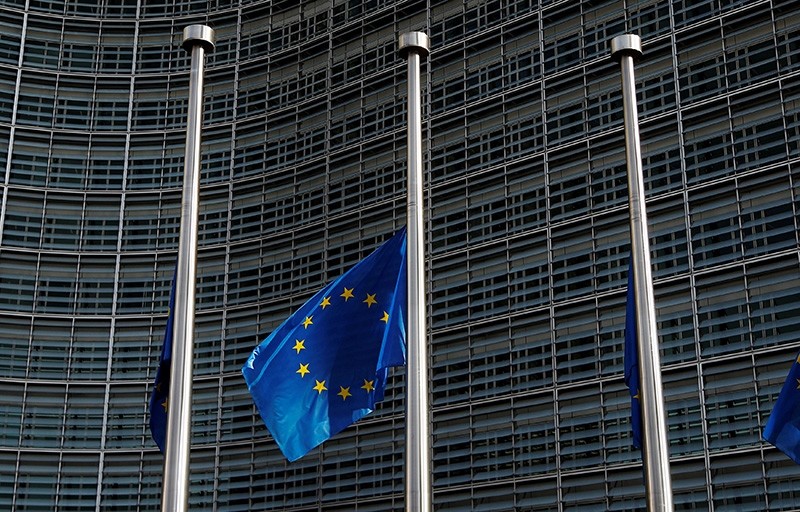 An European Union flag is seen outside the EU Commission headquarters in Brussels, prior to a meeting between Britain's Secretary of State for Exiting the EU Dominic Raab and EU's chief Brexit negotiator Michel Barnier, Oct. 14, 2018. (Reuters Photo)
by Compiled from Wire Services
Oct 14, 2018 12:00 am

British and EU negotiators called a pause in their talks on a Brexit deal on Sunday and will wait for the outcome of a summit mid-week before any resumption, four EU sources told Reuters.

"Despite constructive and intensive negotiations, several key issues remain unresolved," one senior EU diplomat said. "No further negotiations are planned ahead of the European Council. The EU negotiator will brief the leaders who will then assess the progress so far."

EU chief negotiator Michel Barnier and Britain's Brexit minister scrambled to hold talks on Sunday ahead of the crunch summit this week as time runs out on striking a divorce deal.

Barnier and Dominic Raab held surprise talks in Brussels, as London insisted the negotiations were far from reaching a conclusion.

Reuters said sources also indicated Barnier would brief leaders of the 27 other member states when they meet for dinner in Brussels on Wednesday, on the eve of a regular EU meeting which British Prime Minister Theresa May will also attend.

With Britain set to leave the bloc at the end of March, European Commission head Jean-Claude Juncker is demanding "substantial progress" this week, specifically on the vexed issue of the U.K.'s border with the Republic of Ireland, an EU member.

With a breakthrough still seemingly elusive, Raab went to Brussels for talks with Barnier to get a head start on Wednesday's summit.

"With several big issues still to resolve, including the Northern Ireland backstop, it was jointly agreed that face-to-face talks were necessary ahead of this week's October European Council," said a spokeswoman for Raab's ministry.

A senior British government source played down reports that a deal had already been done.

"It's very much in the EU's interests to make it look like there is a deal," the source said, because it would then leave Britain looking "like we are the ones being intransigent."

There are still some "big issues" to be resolved and "Dominic has gone out there to try to resolve the outstanding issues."

In Brussels, diplomatic sources told AFP that member states' ambassadors to the EU had been called for an urgent meeting at 6:30 p.m. (1630 GMT).

"They are going to take stock," one source said, but currently the British "do not seem ready yet" to sign off on an agreement.

On Tuesday, she will rake over the Irish border issue with her cabinet, amid speculation that further ministers could resign if the PM plows on with her proposals.

David Davis, who quit as Brexit secretary in July over May's broad blueprint, wrote in The Sunday Times newspaper that her plans were "completely unacceptable" and urged ministers to "exert their collective authority" this week.

She then goes to Brussels, where the border between the U.K.'s Northern Ireland and the Irish Republic remains a sticking point in the Brexit talks.

Neither London, Dublin nor Brussels wants to see checks imposed on the border -- but the problem persists of finding a way to square that aim with May's desire to leave the European single market and the customs union.

Britain has proposed sticking with EU customs rules after Brexit as a fallback option to keep the border open, until a wider trade deal is agreed that avoids the need for frontier checks.

May says this will only be temporary, but her spokeswoman was forced to clarify the point after media reports that the final "backstop" arrangement will have no legal ending date.

The EU's suggestion would see Northern Ireland remain aligned with Brussels' rules, thus varying from the rest of the U.K.

The proffered plans have infuriated the pro-Brexit hard core of May's center-right Conservative Party -- not to mention her Northern Irish allies in the Democratic Unionist Party (DUP).

The minority Conservative government relies on the DUP, Northern Ireland's biggest party, for a thin majority in parliament,

The DUP are staunchly pro-UK, pro-Brexit and fiercely opposed to any moves that could put distance between Northern Ireland and the British mainland.

They have threatened to vote down the British government's budget if May gives way to Brussels.

Health Secretary Matt Hancock told BBC television that any customs backstop would be "time limited," but did not say whether an expiry date would be written into the deal.

Some diplomats in Brussels have suggested the leaders could talk through the night on Wednesday and approve the outlines of an agreement while they are still in the Belgian capital for broader talks on Thursday.