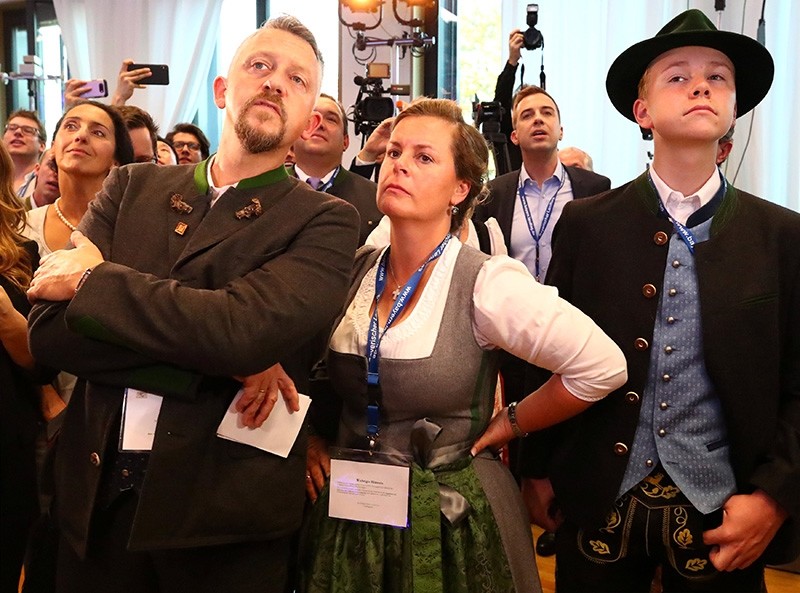 Members of the Christian Social Union Party (CSU) react after the announcement of first exit polls in the Bavarian state elections in Munich, Germany, Oct. 14, 2018. (Reuters Photo)
by Compiled from Wire Services
Oct 14, 2018 12:00 am

The CSU secured 35.5 percent, according to first public TV projections, losing their absolute majority in the wealthy Alpine state they have ruled almost single-handedly since the 1960s.

That would be the party's worst performance in Bavaria, down from 47.7 percent five years ago.

The result, which saw the pro-immigration Greens come second and the far-right Alternative for Germany (AfD) enter the state assembly for the first time, means the CSU will need to form a coalition - a humiliation for a party used to ruling alone.

The Greens won 19 percent of the vote, while AfD took 11 percent.

The center-left Social Democrats, Merkel's junior coalition partners in Berlin, are on course to win some 10 percent, half their score in 2013.

The Bavaria poll result shattered old certainties for the CSU, which had long dominated politics in the state known for its fairytale castles, Oktoberfest and crucifixes on classroom walls.

Since Germany's mass migrant influx of 2015, the party has hardened its folksy brand of beerhall politics with an increasingly aggressive anti-immigration and law and order rhetoric.

The poll result Sunday showed that the tactic -- and Seehofer's brinkmanship in Berlin, including threats to resign -- have backfired badly.

Those Bavarian voters most worried about immigration and cultural identity chose the AfD, while those turned off by the harsh new tone drifted to the increasingly centrist Greens.

The ecologist party, which started as a hippie and peacenik collective in the 1970s, have been the biggest winners and are seen to have morphed into a mainstream force.

Soeder has recently pointed to turbulent "Berlin politics" for the CSU's poor outlook, heightening speculation he was setting up his long-time rival Seehofer as the scapegoat.

Seehofer, 69, has already declared he intends to "complete my mission" as interior minister, and presumably keep needling Merkel.