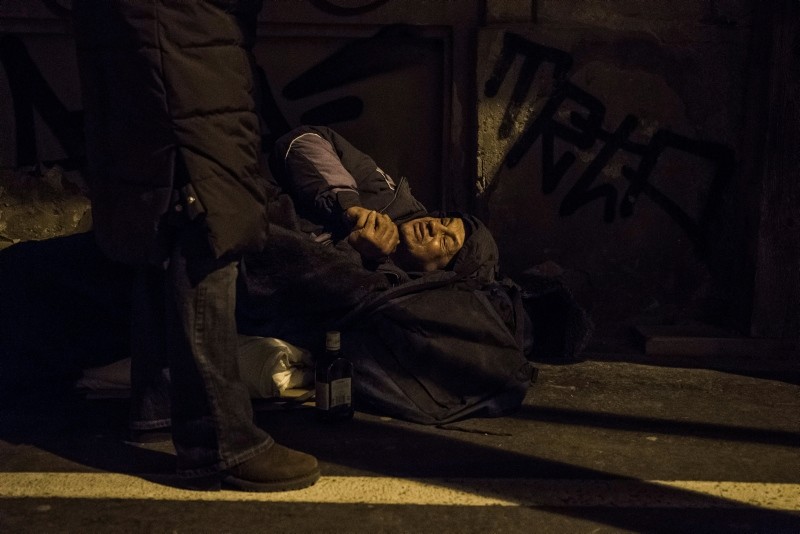 This undated file photo shows an activist of Asylum Foundation standing next to a homeless person on a street as he and his colleagues patrol the streets to assists homeless people in the winter of 2017 in Budapest, Hungary. (EPA Photo)
by Associated Press
Oct 15, 2018 12:00 am

A constitutional amendment that prohibits people from living in public areas takes effect Monday in Hungary, but Ferenc Ribeny's biggest concern is the fate of his dog.

The revision empowers police to issue warnings to anyone seen living rough. Penalties for homeless people who receive four warnings within 90 days include jail time or up to six months in a public works program.

Ribeny, 67, a former restaurant owner, has lived for a year on the streets of Budapest. His companion is Mazli, the terrier he got after his wife's death seven years ago. Ribeny said he has applied for a job at an animal shelter and inquired about occupying a shipping container that was converted into a home.

"I'm hoping it will work itself out, because otherwise I don't know what to do," Ribeny said during a meal at a daytime shelter Sunday. Without Mazli with him, "there's really no point in living."

The seventh amendment to the Basic Law, as Hungary's Constitution is now called, was passed by lawmakers in June. Along with cracking down on the homeless, it includes articles meant to protect Hungary's Christian culture and greatly limit the chances of refugees receiving asylum.

Courts declared an earlier attempt by Prime Minister Viktor Orban's government to outlaw homelessness to be unconstitutional. Writing the ban into the Basic Law makes it harder to challenge legally.

Advocates for the homeless say the ban and the threat of jail time for violators are unlikely to solve the homeless issue, especially when many of those on the streets need medical and psychological care most shelters can't provide.

More resources are needed to prevent people from becoming homeless and to house the ones that do end up with nowhere to stay, Shelter Foundation director Zoltan Aknai said.

"There already have been several unsuccessful attempts for the current homeless care system to absorb those living in the streets," Aknai said. "Now, authorities are trying to achieve this with tougher measures."

The Hungarian government says 9,800 places are available nationwide in shelters for overnight stays and 19,000 in total and recently allocated 9.1 billion forints ($32.2 million) to help the homeless. Unofficial estimates say Budapest's homeless population is of 30,000.

"We are preparing to provide extra assistance to all those living in the streets," Ministry of Human Resources State Secretary Bence Retvari said about government efforts before winter arrives.

Jutka Lakatos lives in a hut near an outlying industrial area with her husband, five dogs and other animals. She earns about $340 a month cleaning offices, considers herself too old to apply for public housing and says she wants to avoid the "inhumane" conditions of homeless shelters.

"I much prefer to choose the free life," said Lakatos, 64, a member of homeless advocacy group A Varos Mindenkie (The City Is For All.) "I don't have to fear lying on the floor like a herring and that if I roll over then 30 other people also have to roll over."

She hopes the constitutional amendment that outlaws living in public places won't be enforced strictly.

"We trust that after an initial enthusiasm, they will acknowledge that it is totally pointless and nothing will come of it," Lakatos said.