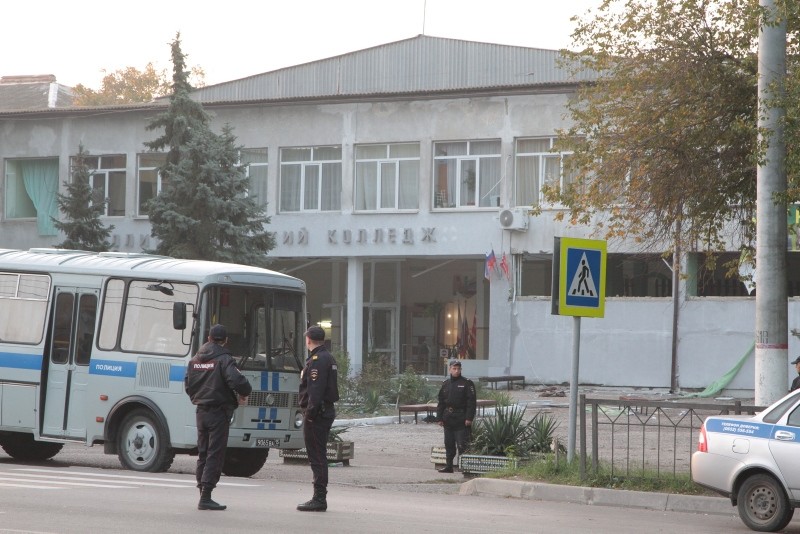 Russian policemen gather outside the damaged building of a college following a recent attack in the city of Kerch, Crimea October 18, 2018. (Reuters Photo)
by Associated Press
Oct 18, 2018 12:00 am
Authorities on the Crimean Peninsula were searching for a possible accomplice of the student who carried out a shooting and bomb attack on a vocational school, killing 20 people and wounding more than 50 others, an official said Thursday.

An 18-year-old student, who later killed himself, was initially believed to be the only one to have been involved in the carnage at the Kerch Polytechnic College on Wednesday. Authorities haven't provided a motive for the shooting, and teachers and classmates described the attacker as a shy man who had few friends.

But Kremlin-appointed Crimean chief Sergei Aksyonov told Russian news agencies on Thursday that it is possible that the attacker, identified as Vyacheslav Roslyakov, had an accomplice.

"The point is to find out who was coaching him for this crime," he said. "He was acting on his own here, we know that. But this scoundrel could not have prepared this attack on his own, in my opinion and according to my colleagues."

Russia annexed the Crimean Peninsula from Ukraine in 2014. Wednesday's attack in the city of Kerch was by far the worst by a student in Russia, raising questions about school security in the country. The Kerch Polytechnic College had only a front desk with no security guards.

The death toll from the shooting climbed by one to 20 on Thursday after one of the wounded died in a hospital, and the first victim will be buried later in the day.

Dozens remain hospitalized in Kerch, and at least 10 people with severe injuries will be airlifted to top Russian hospitals for surgery, Health Minister Veronika Skvortsova said.

Most of the people killed died from gunshot wounds, and those who ended up hospitalized have injuries from a blast from an improvised explosive device that was packed with shrapnel.

"The kids' muscles have been 'minced' with small metal objects," Skvortsova said. "Those who have their organs ripped apart, we are finding metal balls in kidneys, intestines, in blood vessels. That is how powerful the blast was."

The school attack in Kerch was the greatest loss of life in school violence in Russia since the Beslan attack by Chechen separatists in 2004, in which 333 people were killed during a three-day siege, many of them children, and hundreds of others wounded.

Since Crimea's annexation, Russian authorities have repeatedly warned of a terrorism threat coming from unnamed Ukrainian nationalists as well as ethnic Crimean Tatars, an indigenous Crimean people. But despite acts of public defiance and rallies, both groups haven't been engaged in any violent activities in Crimea.