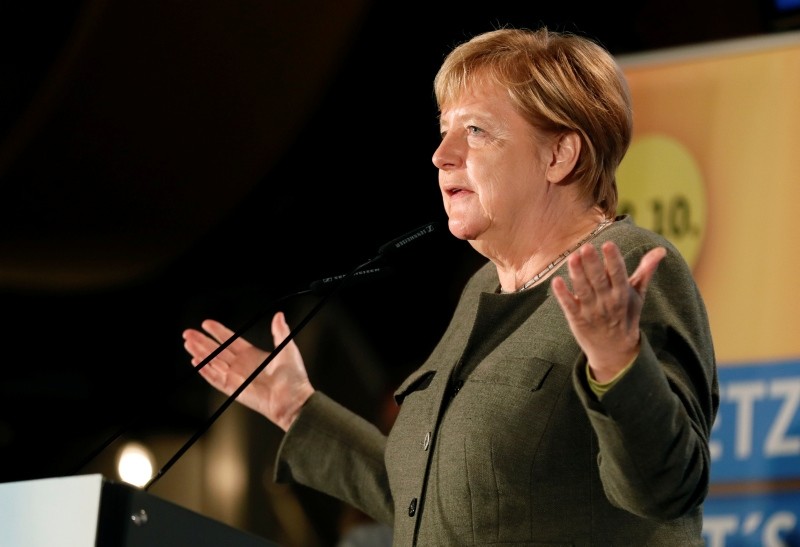 German Chancellor Angela Merkel gives a speech during an election campaign rally of the Christian Democrats (CDU) in Ortenberg, Germany, October 22, 2018. (EPA Photo)
by Compiled from Wire Services Oct 22, 2018 12:00 am

German Chancellor Angela Merkel on Monday called the killing of journalist Jamal Khashoggi in the Saudi consulate in Istanbul a "monstrosity" and vowed to halt German arms exports to Saudi Arabia until the case is cleared up.

Merkel decried what she called "the monstrosity there in the Saudi consulate in Turkey" during a campaign rally in the town of Ortenberg, about 50 km northeast of Frankfurt.

"It must be cleared up. As long as it's not cleared up, there will be no arms exports to Saudi Arabia. I assure you of that very decidedly," she said.

On Saturday, Saudi authorities said Khashoggi died in a brawl involving visiting officials, an account that has drawn widespread skepticism. Riyadh also said 18 Saudi suspects were in custody and intelligence officials had been fired.

Merkel's government has called Riyadh's explanation of Khashoggi's death insufficient. Economy Minister Peter Altmaier underlined Monday its position that "we won't at this point approve any further arms exports because we want to know what happened."

Altmaier told ZDF television that a joint EU position is needed "because only if all European countries agree, this will make an impression on the government in Riyadh." He said "it will have no positive consequences if we, as we are doing, currently don't pursue our arms exports if at the same time other countries fill this gap."