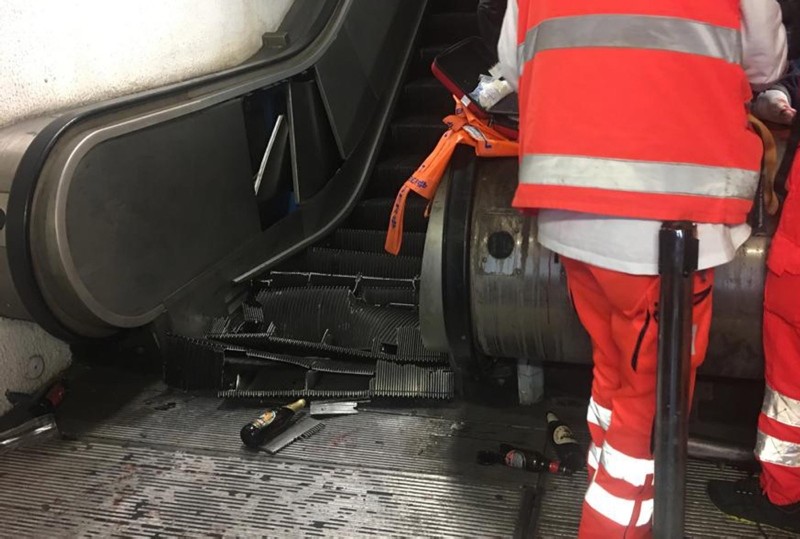 More than 20 people were injured when an escalator in the Rome metropolitan system collapsed Tuesday night.

A video shown on Sky TG24 shows the escalator accelerating suddenly, and the people riding down on it collapsing one onto another. The dramatic footage shows people on the parallel escalator trying to pull others to safety.

The cause was not immediately known. The metropolitan station at Piazza Repubblica near the main Termini train station was closed by investigators.

"The scene that we found was people piled up at the bottom of the escalator," said Rome provincial fire chief Giampietro Boscaino. "People one on the top of the other looking for help. They had various injuries caused by the escalator that was twisted, therefore serious injuries."

A spokesman for Italy's civil protection agency put the number of hospitalized at 24, mostly Russians in town for a Champion's League football game between CSKA Moscow and Roma, but among them were also Italians. Firefighters said seven were in serious condition.

Dramatic footage shows how more than 20 people, mainly Russian football fans, were injured after an escalator in a metro station in central Rome collapsedhttps://t.co/50i0JKDocr pic.twitter.com/VSIiWKPoq0

The Russian Embassy in Italy said that 15 Russian and four Ukrainian nationals had been hospitalized.

The news agency ANSA quoted Rome Mayor Virginia Raggi as saying that witnesses reported people were jumping and dancing on the escalator before the accident. ANSA also quoted city transport agency officials as saying maintenance is carried out on metro system escalators every month.

Most of the victims suffered light leg injuries, but one risks a foot amputation, the ANSA said.

Separately, one CSKA fan was slashed with a knife during clashes between opposing fans outside the Stadio Olimpico, the ANSA news agency reported.

About 1,500 CSKA fans were attending the match.