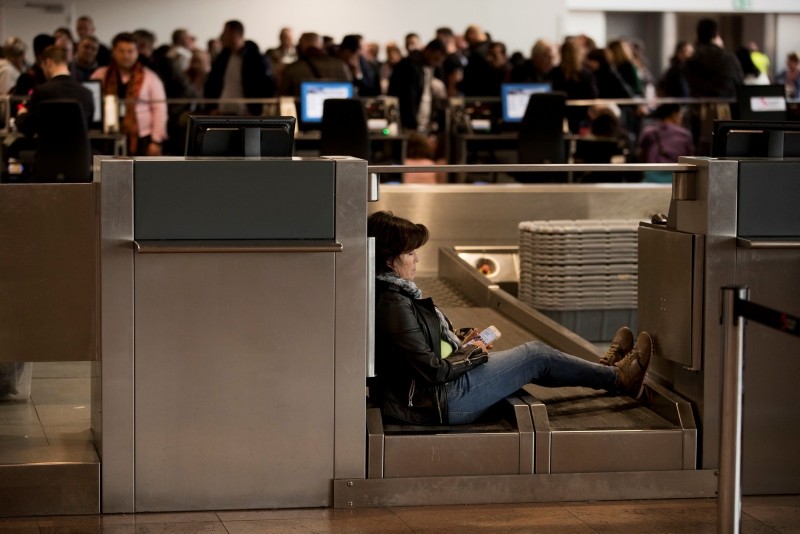 A woman sits in a check-in desk of the departures hall of the Zaventem international airport during a luggage handling workers strike in Brussels. (AP Photo)
by Oct 26, 2018 12:00 am

A strike by baggage handlers at Brussels airport has caused many flight cancellations, affecting thousands of passengers during a major school holiday, an official said Friday.

The travel chaos is set to continue, with Brussels Airport air traffic affected until at least Sunday morning.

"As a result of a work stoppage at baggage handler Aviapartner, no flights are being handled by Aviapartner until Sunday 28 October 6 am (0400 GMT)," Brussels Airport said in an online message.

Around 200 flights in or out of the airport were canceled, according to public broadcaster RTBF, due to the strike over demands for higher staffing levels.

Pierard said most of those affected were Ryanair flights.

"Friday is one of the busiest days of the autumn. A total of 47,000 passengers are due to leave today," Pierard said.

Passengers were advised to contact their airline. Some flights were shifted to Charleroi, Brussels' other international airport, or to Lille in northern France, according to media reports.

The strike comes at the end of a school holiday in neighboring Netherlands and the start of one in Belgium that coincides with All Saints Day.

A meeting between union delegates and at Aviapartner on Friday ended without any agreement, according to the Belga news agency, but was due to resume Saturday.

Brussels airport is the largest in Belgium, with nearly 25 million passengers passing through it last year, compared to seven million at Charleroi airport in the south, the country's second biggest.