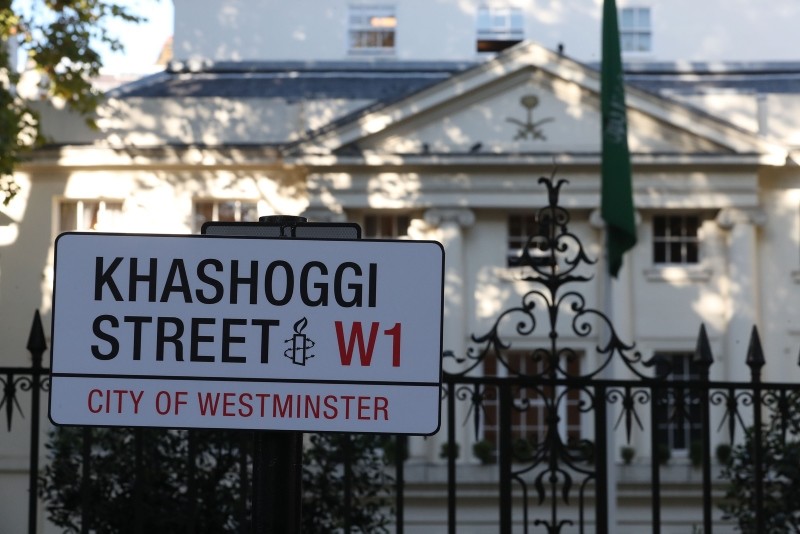 A mock street sign reading ,Khashoggi Street, is erected by Amnesty activists on the street in front of the Embassy of Saudi Arabia in London on Nov. 2, 2018 to mark one month since Khashoggi was killed in Saudi consulate in Istanbul. (AFP Photo)
by Daily Sabah with AFP Nov 02, 2018 12:00 am

Amnesty International campaigners on Friday renamed the road outside the Saudi Arabian embassy in London as "Khashoggi Street" to mark the one-month anniversary of the dissident journalist's murder in Turkey.

Activists from the London-based NGO temporarily erected a mock street sign in front of the diplomatic compound, in the British capital's wealthy Mayfair district, in a symbolic gesture honoring Jamal Khashoggi.

They staged the Friday lunchtime stunt to coincide with the time that he was last seen alive entering the kingdom's consulate in Istanbul on October 2.

"This is just a quick action to show solidarity with Jamal's friends and family," Kristyan Benedict, a campaign manager with Amnesty International U.K., told AFP outside the embassy.

He said Khashoggi's close friends and family had urged activists to protest "in key states that are close to the Saudi regime and giving them diplomatic cover.

"We hope to get momentum towards a U.N.-led investigation into the killing," Benedict added. "The Saudi regime cannot be trusted to investigate this themselves."