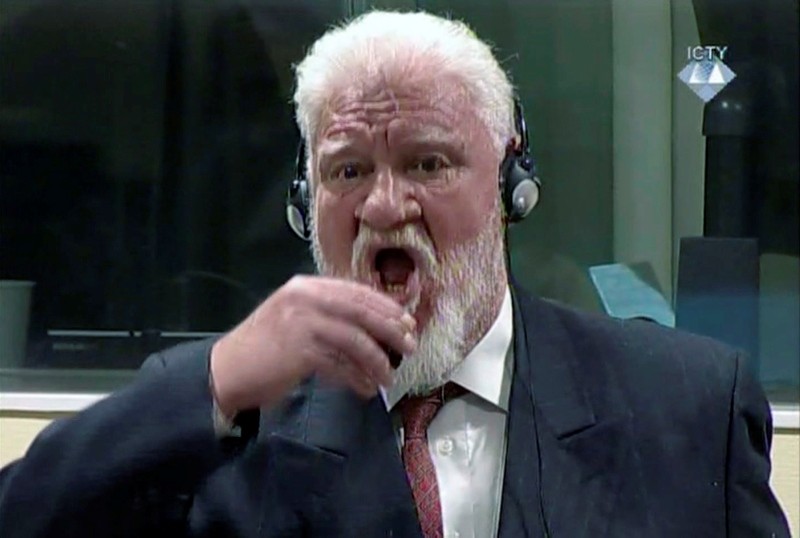 In this ICTY file photo dated Wednesday, Nov. 29, 2017, Slobodan Praljak drinks from a bottle after proclaiming his innocence shortly after hearing an appeals judge confirmed his 20-year sentence for crimes during the 1992-95 Bosnian war. (AP Photo)
by Nov 02, 2018 12:00 am

Dutch prosecutors said Friday they had not managed to establish how a Bosnian Croat war criminal got the poison he used in his courtroom suicide in front of U.N. judges.

The conclusion came almost a year after 72-year-old Bosnian Croat commander Slobodan Praljak swallowed potassium cyanide at an appeal hearing of the former Yugoslavia war crimes court in The Hague.

The hearing was being broadcast live around the world at the time.

"The investigation has not shown in what way and at what point in time Mr Praljak had obtained the potassium cyanide he used," the Dutch public prosecution service said.

"No criminal offenses were established," it added in a statement.

Praljak, in a last show of defiance against the now-shuttered International Criminal Tribunal for the former Yugoslavia (ICTY), took the poison from a small brown bottle on Nov. 29 last year.

Praljak died some two hours later of heart failure at a Hague-based hospital. It was one of the most dramatic days at the tribunal, set up in 1993 to prosecute those responsible for war crimes committed during the bloody 1990s Balkans wars.

Investigators said Friday they believed Praljak "had been considering suicide for some time.

"For instance, he had already had his items packed for shipment to Croatia and said good bye to people on several occasions."

Detectives also found a suicide note after his death in which he told his family he decided "a long time ago" that he would end his life should he lose the appeal in his case.

"It can't be excluded that Praljak already had the poison in his possession for a (very) long time," the prosecutors' office said.

"Potassium cyanide can be stored in its dry form and suicide only requires a very small quantity.

"In this context, it isn't strange that the importation or storage of the substance wasn't noticed," it said.

Praljak, who worked in film and theater before joining the military, remains a hero to many Croats despite his conviction.

Croatian news reports said he was buried at a private funeral in Zagreb some 10 days after his death.