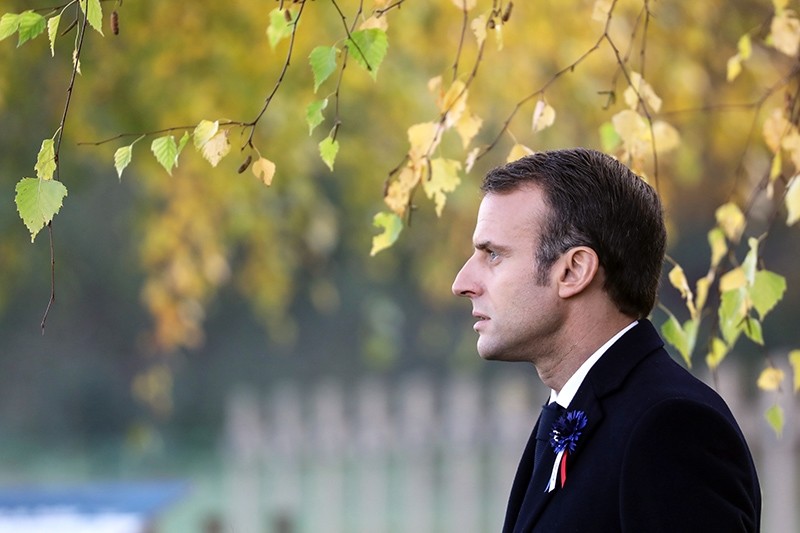 On Nov. 6, 2018, French president Emmanuel Macron pays his respect by the tomb of Lieutenant Robert Porchon, brother-in-arms of French writer Maurice Genevoix killed during World War I at the Trottoir necropolis in Les Eparges. (EPA Photo)
by Nov 06, 2018 12:00 am

Six people have been arrested as part of a preliminary investigation into a suspected plan to attack French President Emmanuel Macron, an official close to the probe said.

The source said French security services arrested the six on Tuesday on suspicion of undertaking an "imprecise and loosely-formed" plan for "violent action" against the president.

French TV channel BFM TV reported that the six were members of the far-right, but that could not be independently confirmed.

The arrests were carried out in three separate areas of France: Isere, southeast of Lyon; Moselle, on the border with Germany and Luxembourg; and in Ille-et-Vilaine, in the northwest near the city of Rennes.

It was not immediately clear what the connection between those arrested was or how they were in touch with one another.

In an interview published on Sunday, Macron warned of the threat from far-right movements across Europe, saying complacency during the 1930s was what had opened the way for the rise of Hitler in Germany and Mussolini in Italy.