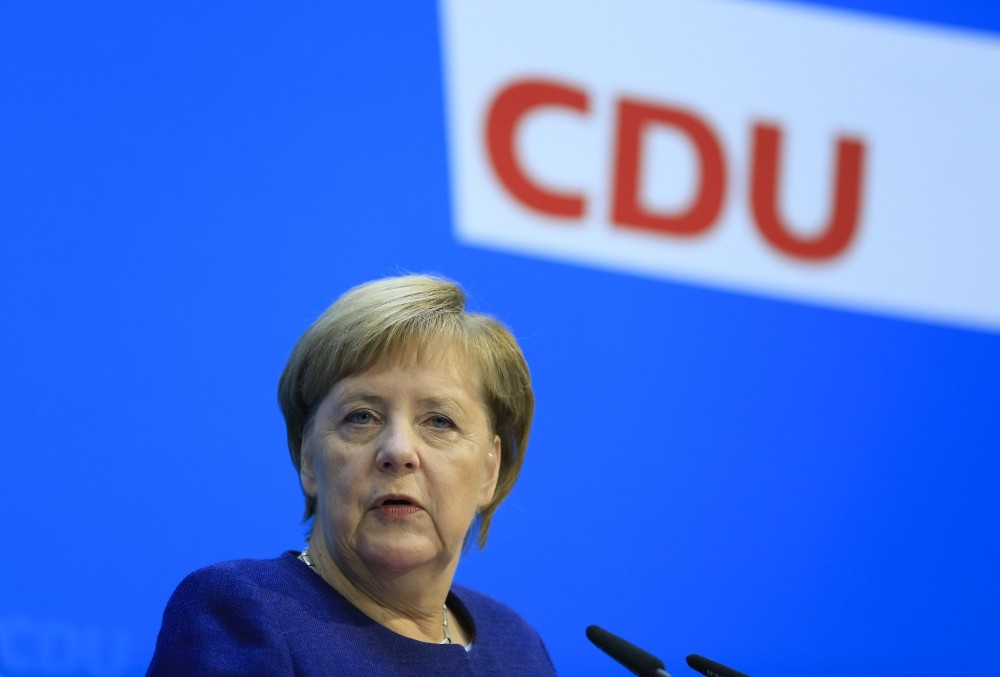 German Chancellor Angela Merkel speaks at a press conference after a meeting of the federal board of the Christian Democratic Union, Berlin, Nov. 5.
by Compiled from Wire Services Nov 06, 2018 12:00 am

German Chancellor Angela Merkel insisted yesterday that she can work well with any potential successor as leader of her party, including a one-time rival seeking a comeback after a decade-long absence.

Merkel's successor is to be elected at her center-right Christian Democratic Union (CDU) congress in Hamburg Dec. 7-8, after the candidates have presented themselves at a series of regional conferences. The chancellor sought to downplay the possible destabilizing impact of the party leadership change on the federal governing coalition with the Social Democrats, which has squabbled since it took office in March.

Merkel announced last week that she would step down as CDU party leader in December, ending an era of nearly two decades in which she shifted the party gradually from the right to the center. Her decision followed two regional votes in which Merkel's center-right bloc and the left-leaning SPD suffered their worst election results in decades while the ecologist Greens and the nationalist Alternative for Germany (AfD) gained support. Merkel, 64, has been chairwoman of CDU since 2000 and chancellor since 2005, making her one of the longest serving leaders of a major country. Her current, fourth, term as chancellor is due to end in 2021.

There are three high-profile candidates to succeed her: CDU general secretary Annegret Kramp-Karrenbauer, who is the closest to Merkel's centrist approach; and two contenders who stand for a more conservative profile, former parliamentary leader Friedrich Merz and Health Minister Jens Spahn.

Many observers question how realistic that is, particularly if Merz becomes CDU leader. Merkel ousted Merz as her bloc's parliamentary leader in 2002 and many doubt they could work together. Merz left the German parliament in 2009. Merkel said she had "always found solutions" with Merz in the past, though "of course we were not always of the same opinion." "I have no doubt that, if that is the outcome, I can work well together with Friedrich Merz, as with every other candidate," she told reporters in Berlin, according to the Associated Press.

CDU secretary general Annegret Kramp-Karrenbauer, was officially put forward by her regional party yesterday to replace Merkel as leader of the party. The CDU in the western state of Saarland bordering France and Luxembourg unanimously selected former state premier Kramp-Karrenbauer, known as AKK.

"Above all, we need a personality at the head of the federal party who manages to integrate," said Saarland's current premier, Tobias Hans, who is also the regional CDU head, as reported by dpa. "We have to succeed in getting all our wings flying properly again," Hans said, adding that only then could the CDU remain a major political party in Germany. Kramp-Karrenbauer has "the necessary experience, but also stands for new impulses, for example, in our party's program content," he said.

The CDU announced yesterday that members would have an opportunity to meet the candidates at eight regional meetings ahead of the December party conference. CDU National Secretary Klaus Schueler said that any party member could be put forward as a candidate for the leadership either before the party conference by a division of the party at federal, state, district or district association level, or at the party conference itself by a delegate.