German Chancellor Merkel calls for creation of an EU army 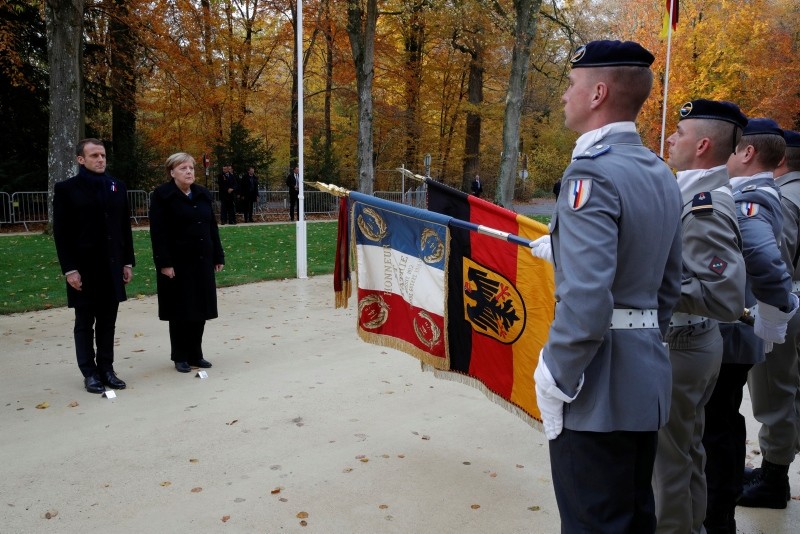 Macron and Merkel inspect a joint military brigade made up of troops of both side, in the Clairiere of Rethondes during a commemoration ceremony for Armistice Day, 100 years after the end of WWI, in Compiegne, France, Nov. 10, 2018. (AP Photo)
by Nov 13, 2018 12:00 am

German Chancellor Angela Merkel on Tuesday made a clear call for a future European army, in an apparent rebuke to US President Donald Trump who has called such proposals "very insulting".

Addressing European MEPs on her vision for the future of Europe, Merkel also called for a European Security Council that would centralize defense and security policy on the continent.

Merkel's call came as Trump again mocked French President Emmanuel Macron for his own suggestion to create a European army, a proposal that Washington fears could overshadow the NATO alliance.

Last week, Trump slammed the idea in a tweet as "very insulting, but perhaps Europe should first pay its fair share of NATO, which the U.S. subsidizes greatly!"

"What is really important, if we look at the developments of the past year, is that we have to work on a vision of one day creating a real, true European army," Merkel told a session of European Parliament, drawing applause and some boos.

Merkel added that the proposal could be run in parallel to trans-Atlantic cooperation within the NATO military alliance, but underscored that "only a stronger Europe is going to defend Europe".

"Europe must take our fate into our own hands if we want to protect our community," she said.

Merkel also said: "I will propose the establishment of a European Security Council with a rotating presidency," a proposal she first made last summer but failed to gain traction.

European Commission President Jean-Claude Juncker said on Sunday that any European army "will have to align with NATO forces" and not be in opposition to or competition with US forces.

In 2015, Merkel in a bold move kept open German borders to a mass influx of refugees, drawing the ire of EU partners in eastern Europe who refused to follow suit.

Europe "cannot be successful" without "European solidarity", she said, adding that her government "took far too long to realize the issue of refugees was an issue for the whole of Europe and not just Germany."

"Tolerance is the soul of Europe that is an essential component of what makes us Europeans," she said.

On Brexit, Merkel called Britain's departure from the EU "a deep wound" as she thanked EU chief negotiator Michel Barnier, in attendance in Strasbourg.

"We are all realizing that it is ever more difficult to find a balanced outcome," she said.