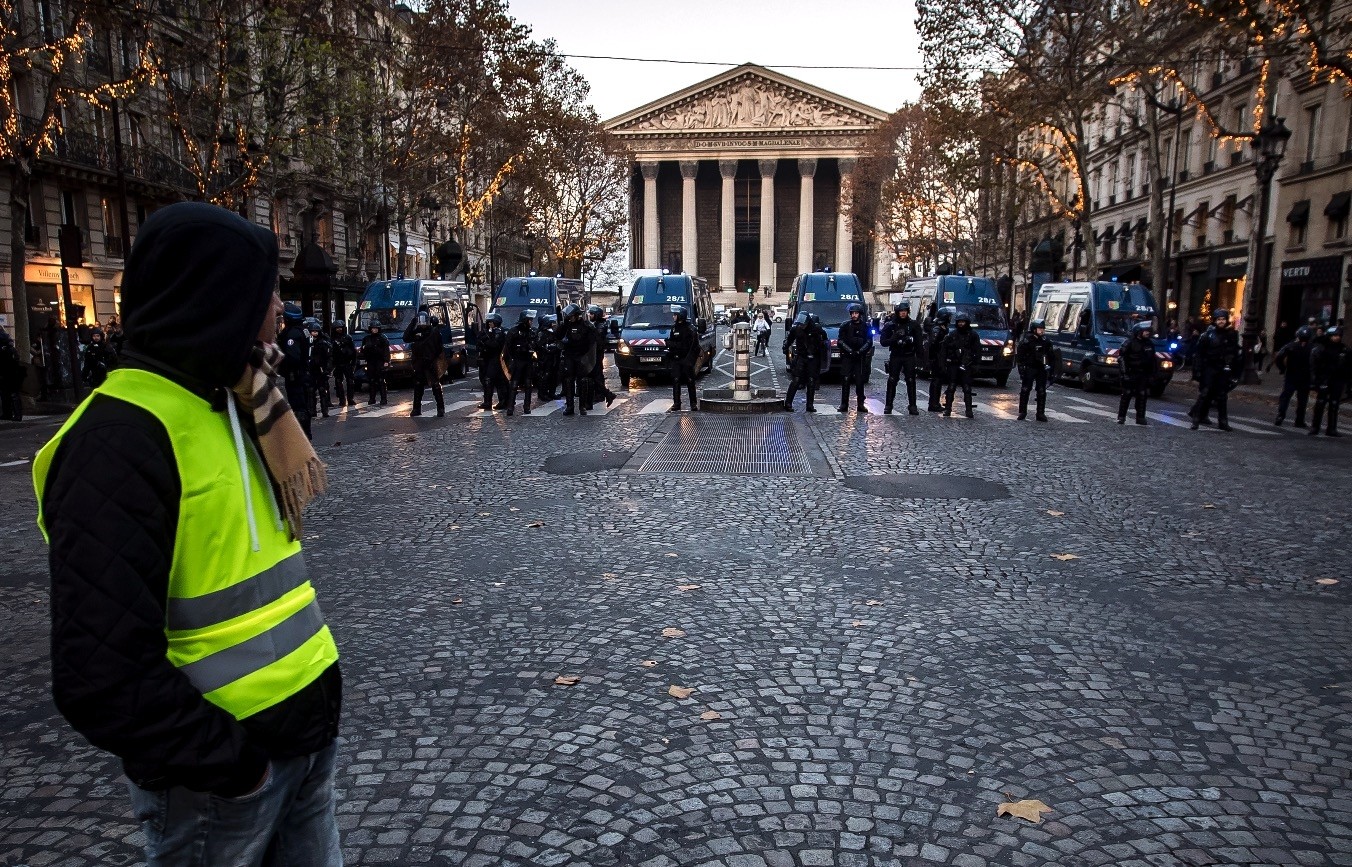 French President Emmanuel Macron's popularity has dropped to just 25 percent as the newest people's movement, the ‘yellow jackets,' has left the country in gridlock

Saturday, Nov. 17 saw nearly 300,000 people take to the streets of France over President Emmanuel Macron's plans to impose new fuel taxes. Approximately 283,000 people were estimated to have taken part in more than 2,000 protests at roundabouts and on major highways and thoroughfares across the country the Interior Ministry said. Some 227 people were injured, seven seriously, including a police officer, and 117 were detained, with 73 taken into police custody.

Not just different types of motor fuels, but the prices of natural gas for radiator and water heating as well as food prices are also on the rise in France; and with these grievances in mind, several hundred protesters took to the streets of Paris as well, yelling "Macron resign!" and singing La Marseillaise massed on the Champs-Élysées and the Place de la Concorde, hoping to march toward the Élysée Palace, the president's official residence.

President Macron's situation does not seem to be very favorable, as a poll published in the Journal du Dimanche the day after the nation-wide protests, conducted by the Ifop group, found his approval ratings to have dropped to just 25 percent. Only four percent of respondents said that they were "very satisfied" while 21 percent were "mostly satisfied." Some 34 percent were "mostly dissatisfied" while 39 percent were "very dissatisfied" according to the Ifop poll. The survey was conducted Nov. 9-17 on 1,957 people.

Macron's latest dip still has him higher than former-President François Hollande's absolute low point of a mere 20 percent approval rating, and it showcases yet another example of the French quickly turning against a president they elected. His nickname, "President of the Rich," is popular among the protesters, who say he is neglecting the middle, lower middle and working classes.

Although most of the blockades were carried out without incident, tempers flared at times as some drivers confronted protesters or tried to force their way through. In the eastern Savoie region, a 63-year-old woman was killed when a mother trying to take her daughter to see a doctor panicked after protesters surrounded their car and suddenly accelerated into the crowd. The driver, who police said was in a state of shock, was taken in for questioning. "This is what we were worried about... unorganized demonstrations by people who aren't necessarily used to such things," Interior Minister Christophe Castaner said in a statement.

Footage obtained by Le Parisien show the protesters at the Élysées Palace obstructed by riot police and a limited use of tear gas; "The police are with us" chanted the protesters to the officers in a show of good faith, saying that their grief is with the president and not the officers. It is extremely rare that protesters manage to get this close to the presidential residence and even more so that the protests didn't result in violent clashes as often happens during demonstrations of a more political or ideological nature.

"We want to work, but not for nothing," said Joffrey Gouillet, 27, a protester in Pont-de-Beauvoisin. "The goal isn't to create havoc but to get our rights back. You can't make it to the end of the month even with two salaries."