France's Macron refuses to bow to 'thugs' after violent protests 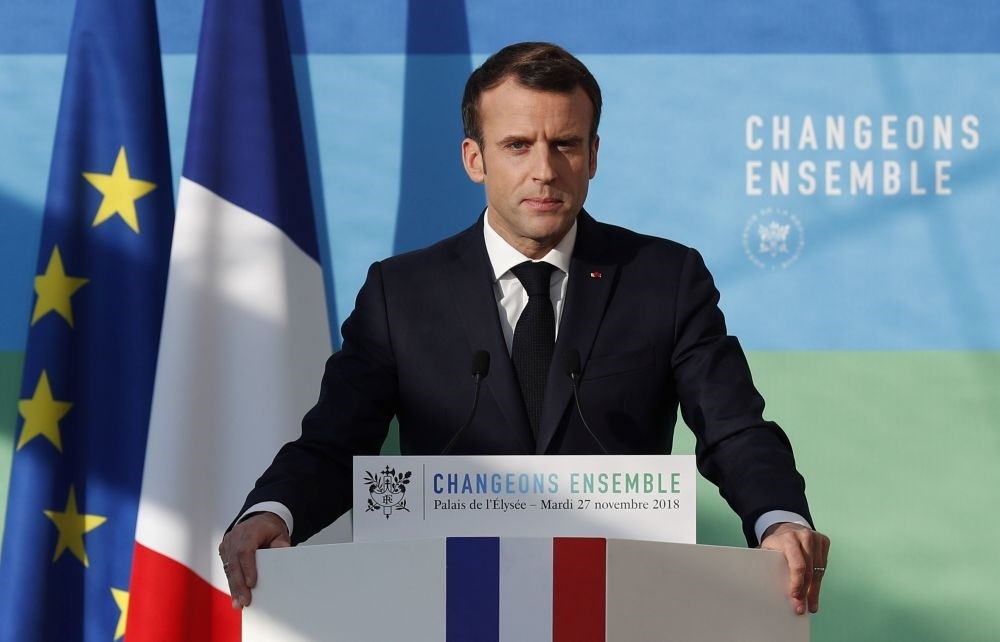 French President Emmanuel Macron delivers a speech after attending a meeting at the Elysee Palace, Paris, Nov. 27.
by Compiled from Wire Services Nov 27, 2018 12:00 am

"I don't confuse thugs with fellow citizens who want to send out a message. I feel understanding for these fellow citizens but I will not indulge those who want destruction and disorder," Macron said in an hour-long address on energy policy which also took in the "yellow vests" protest.

The unrest, which over the weekend left some Parisian boulevards badly vandalized, have stung Macron as he seeks to fight back against a sharp fall in popularity and has exposed him to charges of being out of touch with voters.

The unrest has left two dead and 606 injured, according to the Interior Ministry. The government blamed much of the violence on a small minority of "ultra-right" activists. Protesters clad in fluorescent jackets have blocked highways across France since Nov. 17, setting up burning barricades and deploying convoys of slow-moving trucks, often denying access to shopping centers and some factories.

He said the French people could not demand better public services and also expect lower taxes. However, he acknowledged the increase in diesel tax, which kicked in just as pump prices were rising, had inflicted more pain than anticipated. "We need a way of working that makes this tax more intelligent," he said, putting forward the idea of a review every three months, although the details of how that would be carried out and implemented were not clear.

As part of his new energy strategy, Macron confirmed yesterday that France will not meet a target to cut its reliance on nuclear energy from over 70 per cent to 50 per cent until 2035. France depends more on nuclear energy than any other country, getting about three-quarters of its electricity from its 19 nuclear plants. The French leader said it was not currently feasible to replace nuclear power with renewable energy, but with sufficient progress in France and Europe on renewable energy and energy storage technology, that could become a possibility in the future.

A few hours before Macron was due to speak on the issue, the regional leaders, from both center-right and center-left, warned that the "yellow vest" protesters embodied "the territorial and social fault line in our country." The protest movement expressed the anger of France's rural and peripheral communities, the regional leaders said in a column in news magazine L'Opinion. Macron should accept a "moratorium" on fuel tax rises set to come into effect in January, which the government says are necessary to combat climate change, the 12 region presidents said.

Macron's latest dip still has him higher than former-President François Hollande's absolute low point of a mere 20 percent approval rating, and it showcases yet another example of the French quickly turning against a president they elected. His nickname, "President of the Rich," is popular among the protesters, who say he is neglecting the middle, lower middle and working classes. Macron's reputation has been hit by the brusque departure of two high-profile ministers and a summer scandal over his bodyguard, while stubbornly high unemployment, high taxes and rising fuel prices add to a general feeling of discontent.