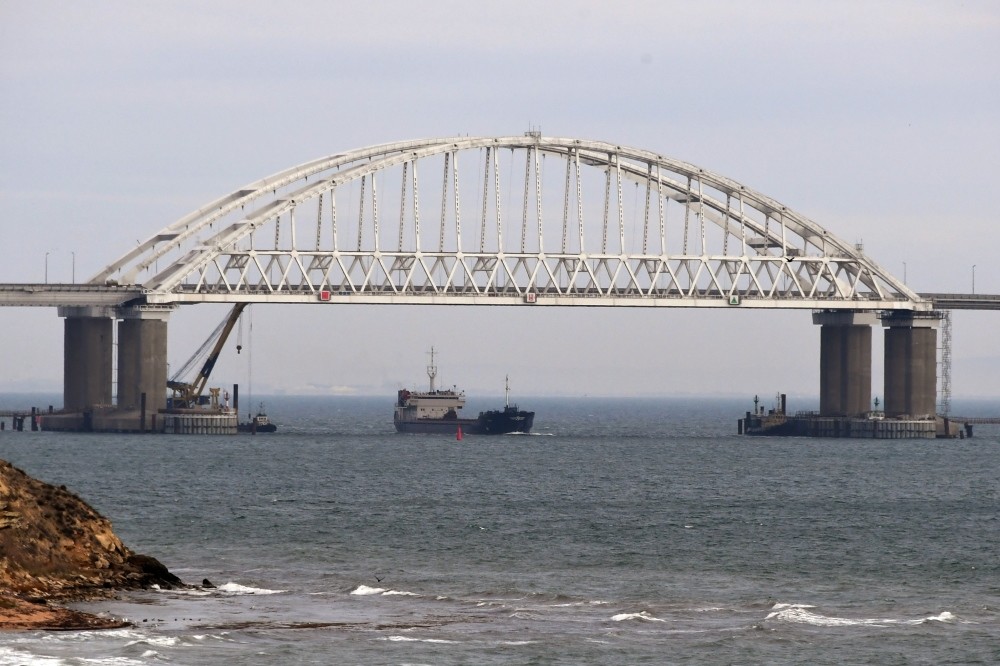 The Kerch strait is the only passage between the Black Sea and the Sea of Azov, connecting Crimea and Russia.
by Compiled from Wire Services Nov 28, 2018 12:00 am

After months of rising tensions over ships navigating the Azov Sea, the latest naval standoff around Crimea between Russia and Ukraine drew international concern with growing calls to scale back further tension. President Recep Tayyip Erdoğan called on Russia and Ukraine to resolve their dispute through dialogue, saying Turkey wants the Black Sea that it also borders to become a "sea of peace." During an address to members of his ruling party, Erdoğan said Turkey, which enjoys close ties with Russia and Ukraine, wants to maintain cooperation with both nations. "At a time when the world is in the claws of serious threats, we would be pleased to see Russia and Ukraine standing together, not against each other," he also added.

The United Nations' secretary-general yesterday urged Russia and Ukraine to use "maximum restraint" and avoid further escalation after a confrontation in the Black Sea, his spokesman said in a statement.

U.N. Secretary-General Antonio Guterres said he was "greatly concerned" about the incident near the Crimea peninsula near the Kerch Strait, calling on "both parties to exercise maximum restraint and to take steps without delay to contain this incident and reduce tensions."

When asked about previous offers of mediation between Ukraine and Russia, Russian Foreign Minister Sergey Lavrov said Russia has no need for it because it views the standoff in the Black Sea as a simple case of a border violation. "I don't see a need for any kind of mediators," Lavrov said in Paris yesterday. He spoke after Germany's foreign minister suggested that Germany, France, Russia and Ukraine could work together to resolve the tensions. Lavrov said that to ensure such incidents don't happen again, Ukraine's Western backers should send a "strong signal" to Kiev to stop any "provocations."Lavrov reiterated Russia's stance that Ukraine "intentionally provoked" Russian authorities by entering maritime space near Crimea, which Russia annexed in 2014. Russia seized three Ukrainian ships and detained the crew Sunday in the Kerch Strait. Ukraine says Russia had no right to stop the ships. Lavrov spoke after meeting with French Foreign Minister Jean-Yves Le Drian, who appeared to soften his criticism of Russia's seizure. "We want all sides to show restraint," Le Drian told reporters. He did not answer, when asked about any new sanctions on Russia or changes to the freedom of naval movement in the region.

Russia and Ukraine traded blame for the confrontation that raised the specter of a full-blown conflict between the neighbors. Ukraine said its vessels were heading to the Sea of Azov in line with international maritime rules, while Russia charged that they had failed to obtain permission to pass through the narrow Kerch Strait that is spanned by a bridge that Russia completed this year. After a weekend confrontation at sea with Russian border guards, a court in Russian-annexed Crimea yesterday ordered three Ukrainian sailors to be held in custody for two months. Russia has so far resisted calls to release them, accusing the sailors of crossing illegally into Russian waters and of ignoring warnings from its border guards.

The confrontation prompted Ukraine to introduce martial law for 30 days, something that Ukraine avoided doing even when Russia annexed its Crimean peninsula or sent in clandestine troops and weapons to the war-torn east. Dmitry Peskov, spokesman for Russian President Vladimir Putin, warned yesterday that the martial law introduced in 10 Ukrainian regions "has the potential" of triggering a flare-up in hostilities in the country's east. Pro-Russian separatist groups and the Ukrainian military have been battling in Ukraine's two eastern-most regions for the past four years. More than 10,000 people, including more than 2,700 civilians, have been killed in the conflict, according to estimates by the United Nations.

Russia had previously blocked the Kerch Strait near Russia-annexed Crimea to stop the ships from passing from the Black Sea into the Sea of Azov, saying the small flotilla had not notified it of its plans in advance and ignored warnings to stop while maneuvering dangerously. The narrow strait is the only passage between the Black Sea and the Sea of Azov. It is spanned by a 19-kilometer bridge that Russia completed this year. Though a 2003 treaty designates the Kerch Strait and Sea of Azov as shared territorial waters, Russia has been asserting greater control over the passage since 2015. Ukraine has increased the number of navy ships and border guard patrols in the Sea of Azov, which is reached via the Kerch Strait between Crimea and Russia.