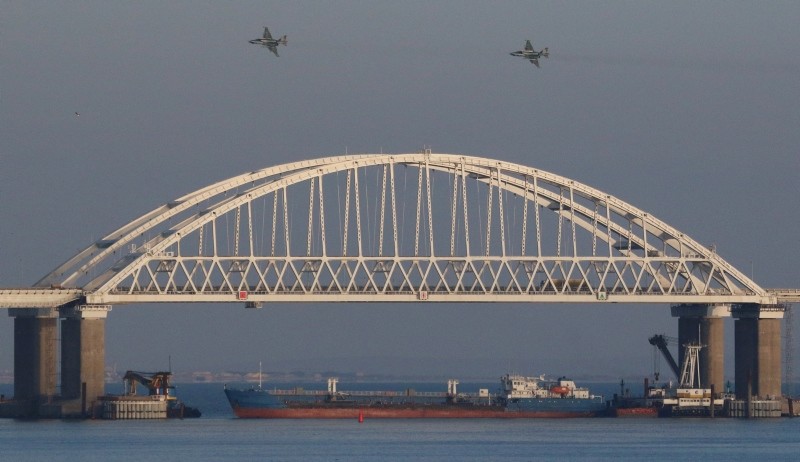 Russian jet fighters fly over a bridge connecting the Russian mainland with Crimea with a cargo ship beneath it after three Ukrainian navy vessels were stopped by Russia from entering the Azov Sea via the Kerch Strait, Nov. 25, 2018. (Reuters Photo)
by Compiled from Wire Services Nov 29, 2018 12:00 am

In an interview with the German tabloid Bild published early Thursday, Poroshenko said, "Germany is one of our closest allies and we hope that NATO states are prepared to send naval ships to the Sea of Azov to support Ukraine and provide security."

NATO, of which Ukraine is a partner but not a member state, has previously called on Russia to release the ships and their crew and said it "stands with Ukraine."

The Russian coastguard opened fire and then captured the Ukrainian naval vessels in the Kerch Strait, which links the Azov Sea and the Black Sea.

Poroshenko accused Russian President Vladimir Putin of seeing himself as a "Russian emperor" and Ukraine as a Russian colony.

"Putin wants the old Russian empire back. Crimea, Donbass, the whole country. As Russian Tsar, as he sees himself, his empire can't function," he said.

"The only language he [Putin] understands is the solidarity of the Western world," Poroshenko stressed, calling for fresh sanctions on Moscow.

"We can't accept Russia's aggressive policies. First it was the Crimea, then eastern Ukraine, now he wants the Sea of Azov," he continued.

"Germany also has to ask itself: What will Putin do next if we don't stop him?"

He said there was evidence to suggest Russia was planning a new ground offensive against Ukraine, and that Kiev had shown satellite pictures supporting the allegation to its partners.

Meanwhile, Ukraine's Infrastructure Minister Volodymyr Omelyan said two Ukrainian Azov Sea ports, Berdyansk and Mariupol, were effectively under blockade by Russia as vessels are being barred from leaving and entering.

Overall, 35 vessels have been prevented from carrying out normal operations and only vessels moving towards Russian ports on the Azov Sea are permitted entry, he said on Facebook.

"The goal is simple — by placing a blockade on Ukrainian ports on the Azov Sea, Russia hopes to drive Ukraine out of our own territory — territory that is ours in accordance will all relevant international laws," he said.

Omelyan said 18 vessels were awaiting entry into the Azov Sea, including four to Berdyansk and 14 to Mariupol. There is also a line of nine vessels to leave the Azov Sea and eight other vessels are standing by near the port berths.

Commander of the Ukrainian Navy Vice Admiral Ihor Voronchenko later said Kiev intends to appeal to the international community with a request to close the Bosporus Strait for Russian ships.

"I, as commander of the naval forces, express confidence that the world will finally recognize that [an act of] aggression has been carried out against the state of Ukraine. We will try to request the closure of the Bosporus [for Russia] in the Republic of Turkey," Voronchenko said.

Russia seized three Ukrainian navy ships and their crews on Sunday near the Crimean peninsula over what it said was their illegal entry into Russian waters — a charge Ukraine strongly refutes.

The seizure of the navy vessels drove tension to its highest since 2015, when Moscow-backed rebels rose against the Kiev government in the eastern Donbass region, sparking a war that has killed tens of thousands.