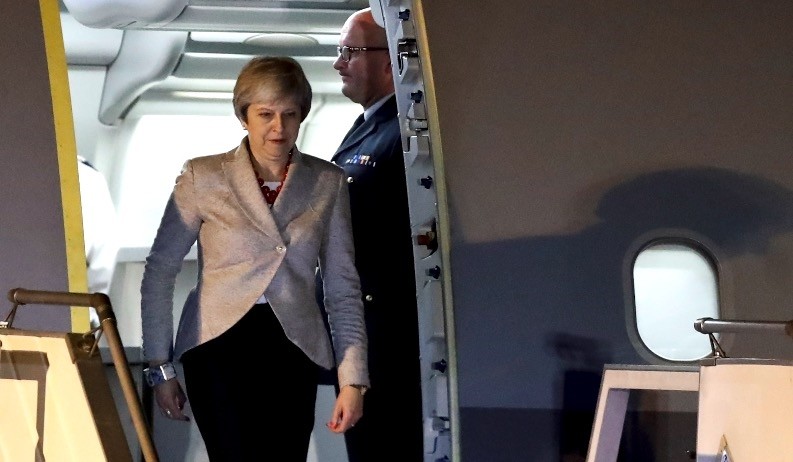 Britain's prime minister is under siege at home as 100 members of her Conservative Party threaten to vote her Brexit plans down, even as she has to deal with Argentina's new drive to open talks on the disputed Falkland Islands

British Prime Minister Theresa May continues to face severe difficulties on the home front as Conservative Party members of Parliament, spearheaded by Jacob Rees-Mogg, have said they will vote down her exit deal.

Rees-Mogg, a prominent Tory Brexiteer with curious grassroots support, has predicted that May's deal will spark a general election, fueling year-old speculation that he will make a play for Number 10.

Nick Timothy, a former May adviser, has commented that the Prime Minister's tactics have left the leavers leaderless, which contributed to the more hardline rise of the Rees-Mogg faction within the party.

Despite hardship, Trade Minister Liam Fox told BBC radio on Friday that May has been effective in changing the public mood in favor of her Brexit deal.

May secured an agreement with European Union leaders on Sunday that will see Britain leave the bloc in March next year with continued close trade ties, but the odds look stacked against her getting it through a deeply divided British Parliament.

U.K. lawmakers will vote on the deal on Dec. 11, and Fox said they should weigh up May's deal against the alternatives.

"The prime minister has been changing the public mood, if you look at what's been happening in polling there's clearly a shift there," Fox said.

"Members of Parliament need to make their own decisions for themselves, but they have to compare this particular deal against the alternatives," he said.

Adding to her EU divorce dramas, May is on a landmark visit to Argentina for the G20 summit where her hosts are using Brexit to advance their claim on Britain's Falkland Islands.

May arrived late Thursday on the first visit by a British premier to the Argentine capital since the 1982 Falklands War between the two countries in what is being seen in Buenos Aires as a chance to improve ties.

However, the 3,400 Falkland Islanders insist their British sovereignty remains nonnegotiable and say a proper thaw in their relations with Argentina remains distant.

They have reason to be worried about Brexit: If Britain leaves the European Union without a deal, the Falklands' economy – heavily reliant on tariff-free squid exports to EU member Spain – could face a serious blow.

Britain's sovereignty claim to the islands, known in the Spanish-speaking world as the Malvinas, dates back to 1765, and it has held permanent administration since 1833.

Argentina's then-ruling military junta invaded on April 2, 1982 but surrendered on June 14 to a British task force after a brief but intense and bloody war under Prime Minister Margaret Thatcher, the Iron Lady.

Faurie told Agence France-Presse (AFP) ahead of the summit that Buenos Aires was discussing with London the possibility of "creating more connectivity to the islands."

"There is a lot of room still to grow in terms of confidence and trust between the two countries," he said.

"Our expectation is that the rebuilding of bilateral trust... will constitute a sort of substantive material to discuss all other issues about the sovereignty of the Malvinas."

Brexit is also an opportune moment for Anglo-Argentine ties. Britain is seeking new trade partners outside the EU, while Argentina needs to find ways out of an economic crisis.

"Post-Brexit, [Argentines] are imagining that if the Falkland Islands has to get its economic act in order, that may open up channels," Richard Lapper, a South America specialist at Chatham House, the Royal Institute of International Affairs think tank in London, told AFP. "The big prize for Britain is the prospect of very cheap agricultural imports.

"The Argentines may say they only want to do a deal on food if we have a side agreement on the Falklands," he added.

As an EU member state's overseas territory, the Falkland Islands enjoy tariff- and quota-free access to the European single market.

Some 94 percent of fisheries exports go to the EU, contributing 40 percent of the islands' gross domestic product and a third of government revenue.

Even so, establishing alternative trade links with Argentina seems a long way off.