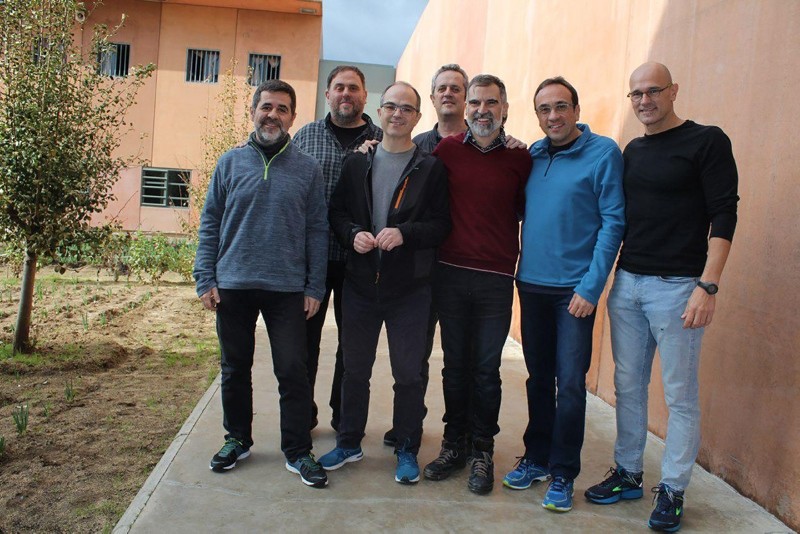 They wanted to highlight what they see as their unfair treatment by Spain's justice system, he said.

"I did not recommend this action," he added. "It is a decision of my clients and they have my full support."

The two men accused Spain's Constitutional Court of preventing their appeals from making it to the European Court of Human Rights, in a statement read by their lawyer.

"We will never give up on our right to a fair trial. We do not ask the Constitutional Court for any treatment of favor. But we do not passively accept any discrimination or unwanted delays," they said.

Pina said he did not know if the five other Catalan separatist leaders jailed in the Lledoners penitentiary some 70 kilometers (43 miles) north of Barcelona would join the hunger strike.

Prime Minister Pedro Sanchez said the hunger strike "was obviously not good news" and was not justified because the rights of the jailed Catalan separatist leaders were being respected.

"I think it is important to stress that they will have a fair trial because we live in a society based on the rule of law and the judiciary is independent," he told reporters at the G20 summit in Buenos Aires.

Prosecutors are seeking jail terms of up to 25 years on charges of rebellion or misuse of public funds over the failed secession bid. They are asking for sentences of 17 years for Sanchez and 16 years for Turull.

The sensitive trial is expected to start in early 2019 and will focus on the attempt by Catalan leaders to break away from Spain in October 2017 by staging a referendum despite a court ban and subsequently proclaiming independence.

Nine separatists in all are in pre-trial detention. The seven at Lledoners prison have been held for between eight and 13 months without trial.

In a statement, Catalan regional president Quim Torra expressed his "solidarity" with the two hunger-striking prisoners.

"This dramatic and drastic measure is being taken because of what we find to be the complete violation of citizens' rights, civil and political rights, and of respect for the legal process. It's my personal view that criminal law is being used for vengeance," he added.

The announcement of the hunger strike comes a day after the first photo of the seven jailed Catalan leaders at the Lledoners prison was released by grassroots pro-independence organization Omnium Cultural.

The picture -- splashed across the cover of Catalan newspapers on Saturday -- shows the seven men smiling and wearing casual clothes in one of the courtyards of the prison.

Omnium Cultural said it released the picture to send a message of "unity" ahead of the start of their trial.

Sanchez told Reuters in an interview last week that he was convinced he would not get a fair trial in Spain, but believed he and other separatist leaders would be acquitted by the European Court of Human Rights.

Tensions with Madrid have cooled since last year but the Catalan government continues to advocate for a referendum on leaving Spain, something the Spanish government has said it will not accept.

Election results and polls show that the 7.5 million resident of the wealthy Catalonia region are roughly equally divided by the secession issue.