Thousands of protesters rally in Georgia against 'election fraud' 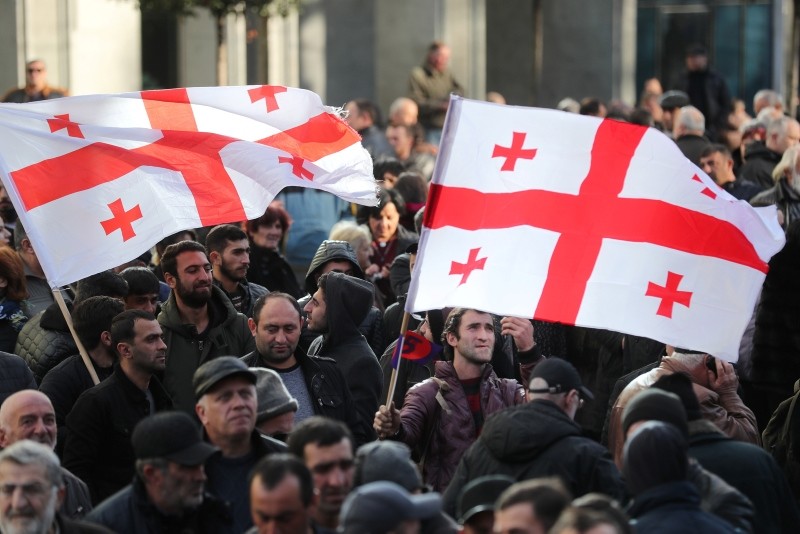 Around 25,000 Georgians protested Sunday against the election of a ruling party-backed candidate to the presidency and demanded snap parliamentary polls in a move that threatens to complicate the transition of power in the Western-backed nation.

Holding Georgian and EU flags, protesters alleged vote-buying and other irregularities as they packed Rustaveli Avenue in front of the parliament building in the center of the Georgian capital Tbilisi.

The former reformist president and leader of the 2003 "Rose Revolution" Mikheil Saakashvili addressed the huge crowd by video link from Amsterdam, where he lives in self-imposed exile.

"Georgia's future is being born on this square today," said Saakashvili, accused by the authorities of abuse of power.

"We will fight peacefully but we will never give up," he said, flashing the victory sign at the end of his speech.

Zurabishvili has said her election was a step forward for women and a move closer to Europe.

But opposition leaders including Zurabishvili's rival Grigol Vashadze have refused to accept the result, pointing to instances of alleged vote-buying, voter intimidation and ballot-stuffing in the election's second round.

Fresh street protesters could spark concern for the country, which has seen civil wars, mass demonstrations and unrest since gaining its independence in 1991 with the breakup of the Soviet Union.

The vote was the small South Caucasus nation's last direct leadership poll as it transitions to a parliamentary form of governance.

In the first round, held in October, French-born Zurabishvili failed to take the 50-percent-plus-one-vote needed to win outright.

The new head of state will be a largely ceremonial figure, but the vote was seen as a trial run for the contest between billionaire Bidzina Ivanishvili's ruling Georgian Dream party and the opposition in more important parliamentary polls set for 2020.

"Georgia does not have a president now," Vashadze, a career diplomat, said to roaring applause from the protesters.

He said the results of the "stolen election" should be annulled and snap parliamentary elections held.

He said the authorities had to overhaul the country's electoral system and by December 16 establish a working group to hold talks with the opposition.

Many protesters accused tycoon Ivanishvili, seen by many as the country's de facto ruler, of stealing people's votes.

"I am here to protest against election fraud," Liana Partsvania, 63, told AFP.

"People took to the streets today because the elections were rigged," said another protester, 20-year-old Gia Mgeladze.

The vote was also seen as a test of Georgia's democratic credentials as it seeks European Union and NATO membership.

Monitors from the Organization for Security and Cooperation in Europe said the election was competitive but they also raised concerns about misuse of administrative resources.

Tensions increased ahead of the second round, as the opposition accused the government of voter intimidation and claimed that ruling party activists had attacked Vashadze's campaign staff.

Zurabishvili in turn said she and her children had received death threats from people affiliated with Saakashvili's United National Movement.

In what critics derided as "vote-buying" ahead of the election, Ivanishvili promised the government would drastically increase social spending and pledged to spend his own money to write off the bank loans of more than 600,000 people.