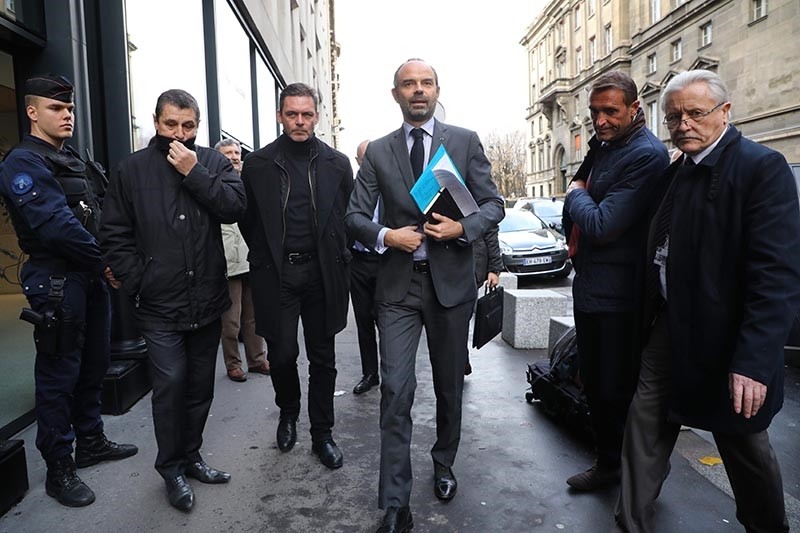 "No tax merits putting the unity of the nation in danger," Philippe said in a televised address, adding that the anger on the streets "originates from a profound injustice: of not being able to live with dignity from one's work."

He added that any future protests should be declared in advance and "take place calmly."

The decision, however, does not put in jeopardy the government's budget commitments, Finance Minister Bruno Le Maire said Tuesday.

"The president has set a course focused on respect of our European commitments, reducing spending, debt and taxes. We will stay the course," Le Maire said in Brussels on the sidelines of an EU finance ministers meeting.

Discontent about the rising cost of living among the "little people," as many protesters call themselves, had been growing in France, along with a sense of marginalization. The approach of President Emmanuel Macron's fuel tax increases in January, meant to wean the French off fossil fuels, has caused things to snap.

The weekend violence in Paris, in which more than 130 people were injured and over 400 were arrested, was the worst in the country in decades, officials have said.

Local media reported Monday that a fourth fatality of the "yellow vests" protests was an 80-year-old woman killed in her home in Marseille by a tear gas canister amid protests on Saturday.

The woman was hit in the face by the canisters while trying to close the shutters of her apartment. She was taken to the hospital but died from shock during an operation, local media said.

The protesters say they want to level a playing field that they believe is tipped in favor of the elite and well-off city dwellers.

The Yellow Vest movement has no leaders but is trying to organize and choose legitimate representatives to negotiate with the government. An attempt to meet last week with Prime Minister Philippe failed.

Another rendezvous announced for Tuesday was canceled by the protesters amid reports that some of them had received death threats from more hardline protesters warning them not to enter into negotiations with Macron's government.

Jason Herbert, a Yellow Vest representative who met briefly Friday with the prime minister, said he and others who bowed out had received threats from fellow demonstrators, and he said the movement was radicalizing.

"We have all received enormous pressure ... threats, be they verbal or physical," Herbert said. "Our lives are still at stake."

He described those making the threats as people who are "terribly hopeless, terribly miserable, (who) lost everything (because) everything was taken from them."

The movement, which organized on social media in October, was initially made up of retirees, the self-employed, artisans and others having a hard time making ends meet, often from rural France and in their 30s and 40s, said Sorbonne sociologist Jean-Francois Amadieu, an expert in social movements.

As the government braces for a fourth weekend of protests, discontent spread Monday to ambulance workers and some high schools with students upset about scholastic reforms.

That's a danger sign, according to Amadieu, who believes the protests could have been nipped in the bud weeks ago.

He said the 40-year-old Macron, who is surrounded by a young team with little experience, misread the signs of the extent of discontent and failed to understand that refusing to budge on a policy isn't always the best route to take in France.

"These are people who think you govern a nation like a startup," Amadieu said.

Macron, whose popularity is plummeting, is also widely seen as arrogant with a style that ruffles sensitivities, such as telling an unemployed man he can find a job if he "crosses the street," or advising a retiree not to complain.

"Never has a president communicated like that," Amadieu said.

On Saturday, shops were looted and cars torched in plush neighborhoods around the famed Champs-Elysees Avenue. The Arc de Triomphe, which cradles the Tomb of the Unknown Soldier and was visited by world leaders last month to mark the centenary of the end of World War I, was besmirched with graffiti and vandalized inside. A 19th century statue was broken.

Mayor of Paris Anne Hidalgo estimated the damage of Saturday's protests as costing between 3-4 million euros ($3.4-4.5 million) in damages.

"The yellow vests will triumph," one scrawled slogan said.

Paul Marra, a Yellow Vest in the southern Bouche-du-Rhone around Marseille, warned over the weekend that time is of the essence to end the crisis.

"The longer the executive office waits, the more complicated things will become," he told the broadcaster BFMTV. He said there would be an "Act 4, Act 5, Act 6," referring to the Saturday protests.

"Today things have gone too far," he added.