Macron seeks way out of crisis amid security warnings 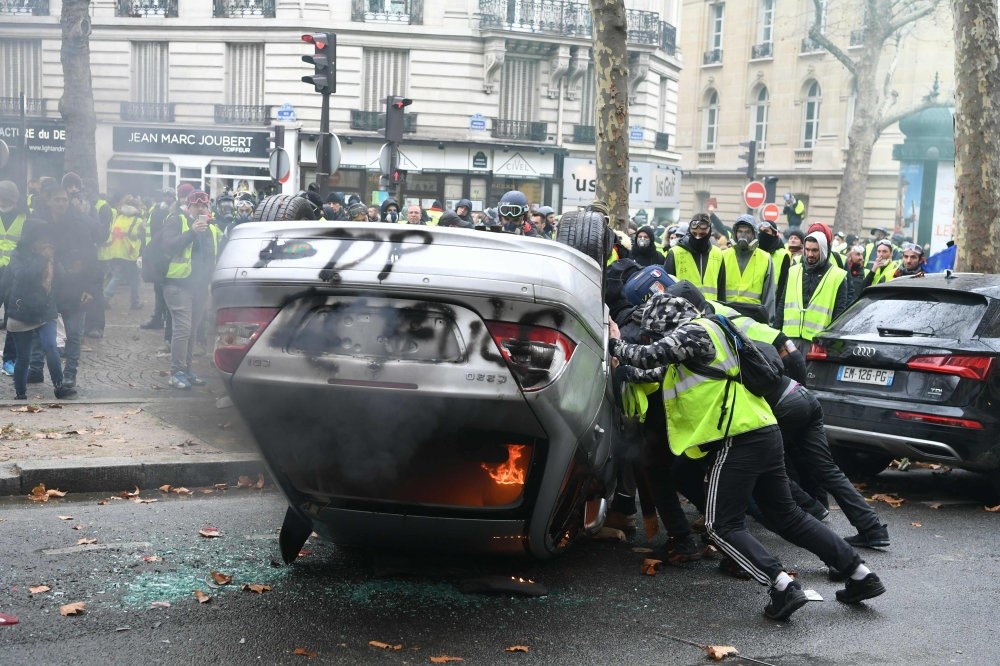 Demonstrators destroy a car during a protest on the Champs Elysees, Paris, Dec. 1.
by Compiled from Wire Services Dec 04, 2018 12:00 am

As French President Emmanuel Macron searches for ways to defuse violent tension caused by the ‘yellow vest' protests, the upheaval has also stirred concerns about the possible decline of visitors choosing to steer clear of the capital Paris

The protests started over high living costs that eventually led to the widespread rioting in Paris over the weekend, increasing security concerns.

The "yellow vest" revolt caught Macron unaware when it erupted on Nov. 17 and poses a formidable challenge to the 40-year-old as he tries to counter a plunge in popularity over his economic reforms, which are seen as favoring the wealthy.

Riot police were overrun Saturday as protesters wrought havoc in Paris's fanciest neighborhoods, torching dozens of cars, looting boutiques and smashing up luxury private homes and cafes in the worst disturbances the capital has seen since 1968.

The Turkish Foreign Ministry on Sunday issued a travel advisory for citizens traveling to France warning them against ongoing violent protests in Paris and across the country. The warning published on the ministry's official website advised citizens who live in France or will be traveling to the European country to avoid areas of demonstrations and not to be in places which could endanger their safety.

It also asked Turkish citizens to exercise caution while traveling through highways and intercity roads, citing recent closure of roads, barricades and blockades. The ministry also advised citizens living and traveling to France "to follow local media, to follow further warnings of our French authorities, our ministry, our embassy in Paris."

According to French authorities, around 5,500 protesters marched onto the streets of Paris. So far, at least two people have been killed and 890 people injured, while 158 of them are security officials. Some 1,081 people have been detained and nine protesters were sentenced to four months in prison. French leader warned that perpetrators of the violence in ongoing protests in Paris will be punished.

The "yellow vest" movement, whose supporters cut across age, job profile and geographical region, began online as an impromptu rebellion against higher fuel prices but has morphed into a broader outpouring of anger over the squeeze that living costs are putting on middle-class household budgets.

The movement's members come principally from the hard-pressed middle class and blue-collar workers living outside the big cities, but it also has more radical fringe elements. It has no clear leadership, making talks all the more complicated for the government. Their core demand is a freeze on further planned fuel tax increases, the next due in January, and measures to bolster spending power. But they have also called for Macron to go and many talks up the idea of revolution. The government is struggling for a way to engage.

"Making a small gesture and then sweeping the problem under the carpet, just as has always been done for the last 30 years, does nothing to solve the deeper, structural problems," government spokesman Benjamin Griveaux told France Inter radio. Public support for the "yellow vests" remains high, with seven in 10 people backing their protest, a Harris Interactive opinion poll conducted after Saturday's unrest suggested.