EU court to decide on Dec. 10 whether Britain alone can reverse Brexit 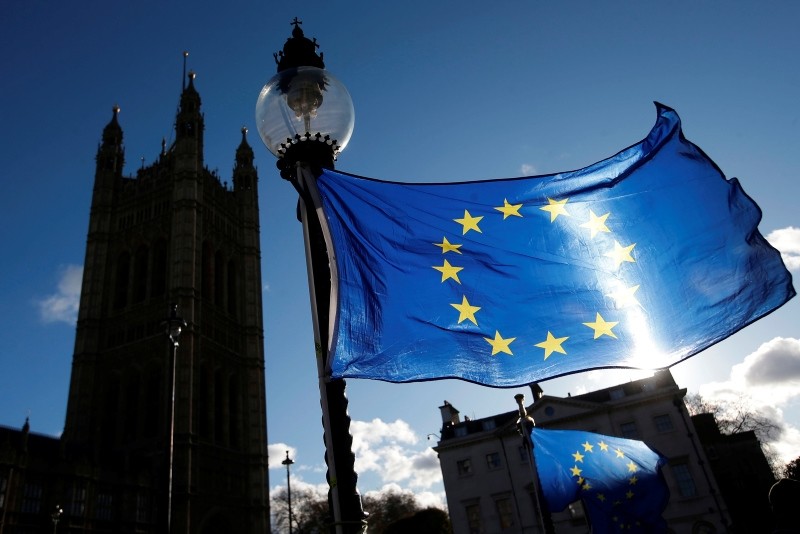 In this file photo taken on December 08, 2017 EU flags are seen attached to a street light outside of the Houses of Parliament in Westminster, central London. (AFP Photo)
by French Press Agency - AFP Dec 06, 2018 12:00 am

The EU's top court will say on Monday whether Britain can unilaterally halt Brexit, potentially offering a boost to those opposed to leaving the European Union on the very eve of a crucial and tumultuous vote in the British parliament.

In a brief statement on Thursday, the Court of Justice in Luxembourg said the justices would deliver a ruling at 9 a.m. (0800 GMT) on Dec. 10 in a case brought by Scottish politicians who argue Britain can simply withdraw its plan to leave in March, without waiting for the approval of the other member states.

Prime Minister Theresa May is battling to get a Brexit deal that she negotiated with the European Union through parliament and insists there is no question of her stopping Brexit.

But in a vote scheduled for Tuesday, the treaty faces heavy opposition from lawmakers both for and against Britain leaving the bloc.

Acting with almost unprecedented speed in a case that the court took up only in October, and on which it held a hearing only last week, a legal adviser to the court said on Tuesday that Britain could indeed make a U-turn entirely of its own accord. Such advice is usually but not always followed by the judges.

The legal clarification of Article 50 of the EU treaty, under which May last year triggered a two-year countdown to departure, matters because opponents of Brexit want to hold a second referendum that would give Britons a choice of staying in the EU. According to an advocate general at the ECJ, that choice is entirely theirs to make and does not need EU approval.

That makes the prospect of a new referendum credible, according to supporters of a "people's vote". The British electorate voted in 2016 to leave the EU by 52 percent to 48.

EU leaders have long insisted they would welcome Britain changing its mind, but many EU officials and legal experts had assumed that the approval of either all or most of the other 27 members states would be needed to halt Brexit altogether.

It is far from clear whether or how Britain could organize a new referendum.

If May wins her vote on Tuesday, the withdrawal is likely to proceed as agreed with Brussels last month. If she loses, her own position could be in jeopardy, there could be a move for a new election, or possibly to hold a new referendum.

Many warn, however, that it could stir unrest. Opinion polls suggest that any new majority for staying in the EU is narrow.

Nigel Farage, whose campaigning for Brexit pressured May's predecessor David Cameron into his failed gamble to hold the 2016 referendum, accused the ECJ of meddling in politics after the legal opinion, saying it was trying to stop Brexit.

ECJ President Koen Lenaerts has long predicted that Britain's withdrawal will end up before his court. In taking on what is known as the Wightman case after one of the Scottish lawmakers who brought it, the court said it believed it must rule before the British parliament takes its decision on the Brexit treaty.