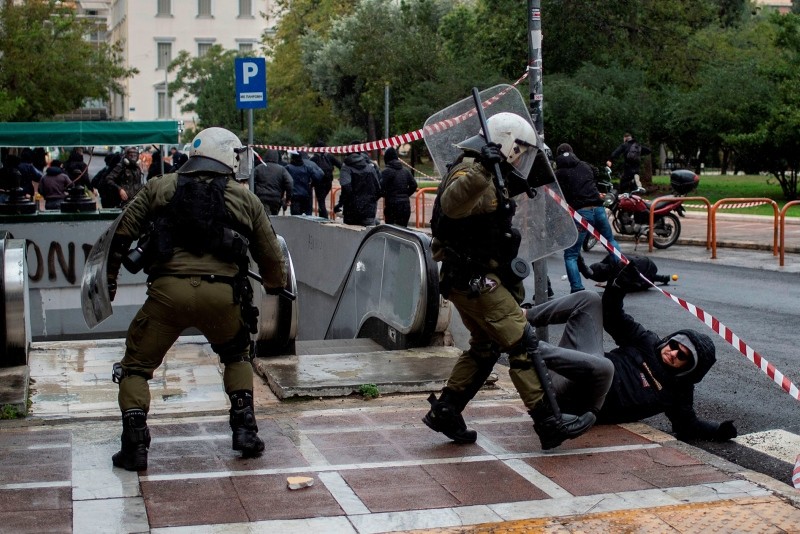 Police clash with protesters on Dec. 6, 2018 in Athens, during a demonstration to commemorate the 10th anniversary of fatal shooting of a teenager which sparked major riots in Greece, in 2008. (AFP Photo)
by Associated Press Dec 06, 2018 12:00 am

Demonstrators clashed with riot police in Athens and the country's second largest city of Thessaloniki on Thursday during the first of a series of events to mark the 10th anniversary of the fatal police shooting of a teenager that sparked Greece's most extensive riots in decades.

In the Greek capital, hooded youths smashed bus stops and threw rocks and other objects at riot police shortly after the start of a student march. Police responded with tear gas, and detained 10 people.

Similar incidents also took place in the northern city of Thessaloniki, where youths hurled Molotov cocktails at police, who responded with stun grenades.

In Athens, authorities deployed about 2,500 police and a helicopter for marches planned to remember Alexis Grigoropoulos, a 15-year-old who died on a night out with friends in the Exarchia district of the capital after being shot by a policeman following an altercation on Dec. 6, 2008.

The teenager's killing sparked major riots which spread to cities across the country and lasted for weeks, with rioters smashing store windows, looting and setting cars alight. The policeman was convicted of murder and sentenced to life in prison. The second policeman present was sentenced to 10 years and was granted conditional release several years ago.

Annual marches marking the anniversary often turn violent, with clashes breaking out between police and protesters.

On Thursday, a second march was scheduled for later in the day, while similar demonstrations were being held in Thessaloniki. A gathering was to be held Thursday night at the spot where Grigoropoulos died.