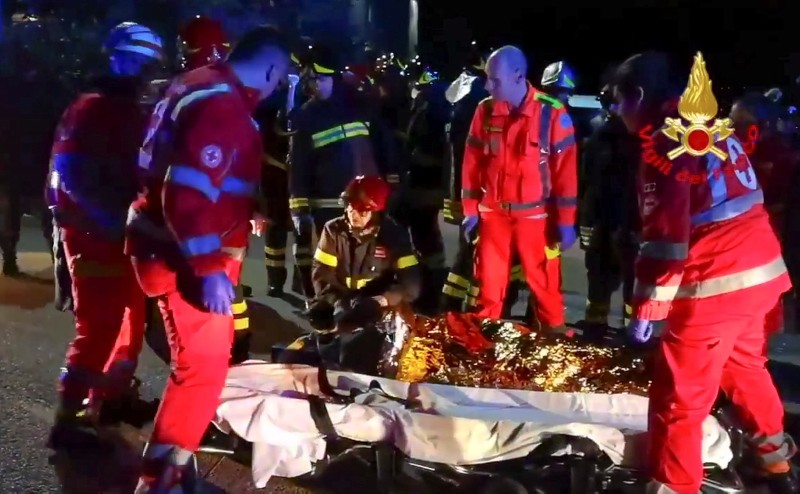 In this frame taken from video rescuers assist injured people outside a nightclub in Corinaldo, central Italy, early Saturday, Dec. 8, 2018. (Vigili del Fuoco via AP)
by Compiled from Wire Services Dec 08, 2018 12:00 am

A stampede of panicked concertgoers, many of them young teenagers, at a disco on Italy's central Adriatic coast killed six people, all but one of them minors, and injured some 100 others early Saturday, authorities said.

The dead included three girls and two boys and an adult woman, a mother who had accompanied her daughter to the Lanterna Azzurra nightclub in Corinaldo, near Ancona, where rapper Sfera Ebbasta was set to perform, Ancona Police Chief Oreste Capocasa said.

A police official told Sky Italia TV that the teenagers were all aged between 14 and 16, while the dead woman was 39.

The bodies of the trampled victims were all found near a low wall inside the disco, Ancona Firefighters Cmdr. Dino Poggiali told Sky TG24 News.

Asked about survivors' accounts that at least one emergency exit door was blocked or didn't work, Poggiali said that it was too early in the investigation to know if any safety violations might have played a role. He said that when rescuers arrived, all the doors of the discos were open.

He said he didn't have any immediately confirmation from survivors that the use of an irritating spray, like pepper spray, had set off the panic.

Fourteen of the injured were in serious condition, and some 40 others less seriously injured, Poggiali said. Some of those with minor injuries were treated and released from a hospital, he said. Firefighters had concentrated on giving first aid to survivors, stretched out on the road outside the club, before starting their investigation, Poggiali said.

La Repubblica newspaper quoted a survivor as saying that at least one of the exits was blocked. Another eyewitness said a wall inside the club had collapsed in the melee.

The Italian news agency ANSA said the audience at Italian rapper Sfera Ebbasta's concert at the Lanterna Azzurra nightclub panicked and ran for the exits after someone sprayed a substance similar to pepper spray.

"It was a mess. The bouncers were getting the persons out," one unidentified witness told RAI state radio. "I went out the main door. People fell, one after the other, on top of each other. Absurd."

A 16-year-old boy told ANSA that disco patrons were dancing while awaiting the start of the concert when the stampede erupted. The boy, who was being treated at a hospital, said that at least one of the emergency exits was locked when he tried to flee.

Authorities didn't immediately say how old the victims were, but RAI state radio said the deceased mother was 40, and that about 1,000 people were inside when the stampede began.

Carabinieri paramilitary police were investigating the cause, in addition to fire officials.

"We will find those responsible for these six broken lives, those who out of malice, stupidity or greed have turned a party night into a tragedy," he added in a statement.