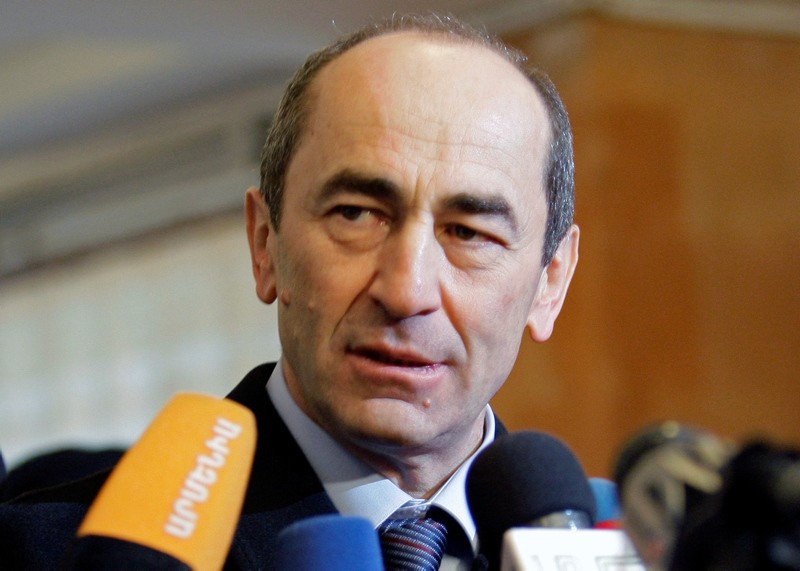 In this file photo dated Tuesday, Feb. 19, 2008, Armenian President Robert Kocharian talks to the media at a polling station in Yerevan, Armenia. (AP Photo)
by Compiled from Wire Services Dec 08, 2018 12:00 am

An Armenian court on Friday put the nation's former president in custody on charges linked to a deadly police crackdown on a 2008 protest over alleged voting fraud in which 10 people were killed.

Robert Kocharian, 64, spent two weeks in jail last summer on charges of violating the constitutional order by sending police to break up the protest in the Armenian capital of Yerevan. He was freed on bail on appeal, but on Friday a higher court ordered that he should stay behind bars.

Kocharian's lawyer said he walked to jail without waiting for police to escort him there.

Russia's TASS news agency reported that the 64-year-old politician is under arrest.

"Robert Kocharyan was arrested under a court ruling. As far as I know, he is being kept at the Yerevan-Center penitentiary," TASS quoted the head of Armenia's National Security Service, Artur Vanetsyan.

Kocharian rejects the charges, calling them a political vendetta by incumbent Prime Minister Nikol Pashinian, who helped stage the 2008 protest. The demonstration protested the results of an election two weeks earlier for Kocharian's replacement. Eight demonstrators and two police died in the clash.

"The main organizer of the events ... tries to clean himself of blood," Kocharian said of Pashinian in a statement Friday.

Armenia's Special Investigative Service had applied to the court accusing Kocharian, who was the president between 1998 and 2008, of overturning the constitutional system in the country. Kocharian denied the accusations.

In the 2008 election, Kocharian, who was president from 1998 to 2008, backed Serzh Sargsyan, who served as Armenia's president for the following decade.

In February-March 2008 the opposition held protest rallies, contesting the result of the election. The protests were dispersed and 10 people, including two police officers, were killed in clashes with police. The Constitutional Court upheld the election result.

Pashinian, an opposition activist at the time, was imprisoned in June 2009 on charges of fomenting unrest during post-election protests.

In April, due to term limits, Sargsyan shifted into the prime minister's seat in what was seen as an attempt to cling to power. But he stepped down after just six days in office in the face of massive protests organized by Pashinian, who then took the prime minister's post.

Wiretaps released earlier this week had Pashinian discussing Kocharian's arrest with the nation's top security official. Pashinian denounced the released recordings as a "declaration of war" by his political foes.

Pashinian has called an early parliamentary election for this Sunday in a bid to win control of parliament, which is still dominated by members of Sargsyan's Republican Party. Pashinian's party is expected to sweep the vote.

He stepped down in October and became acting prime minister to allow parliament to be dissolved and an early election to be held and said he expected a new legislature to emerge that better reflected the country's political realities.