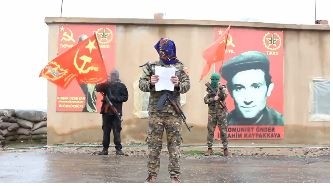 The video shows three men with covered faces holding weapons and TKP/ML flags in their hands while praising the demonstrations against President Emmanuel Macron.

The demonstrators began blockading roads over rising fuel taxes on Nov. 17 but their list of demands have since grown, with many calling for the resignation of Macron, whom they accuse of favoring the rich.

Hundreds of French nationals have been detained as crowds of yellow-vested protesters flocked to the streets of France.

Four people have been killed in accidents since the unrest began Nov. 17. Christmas markets, national soccer matches and countless other events have been canceled or hindered by the protests.

Parts of Paris looked like they were bracing for a hurricane, with boards on windows covering up the Christmas decorations. Police removed any materials from the streets that could be used as weapons, especially at construction sites in high-risk areas.

Protesters also blocked roads, roundabouts and tollbooths elsewhere in France. Offshoot movements have emerged elsewhere, and yellow-vest protests were held Saturday in Belgium and the Netherlands.

Relations between Ankara and Paris deteriorated earlier this year after Macron met with representatives of the People's Protection Units (YPG)-dominated Syrian Democratic Forces (SDF) and offered his support.

Turkey considers the YPG to be a terrorist group due to its links with the PKK.

President Recep Tayyip Erdoğan criticized his French counterpart for meeting with the SDF figures, warning of the dangers of cooperating with terrorist groups.