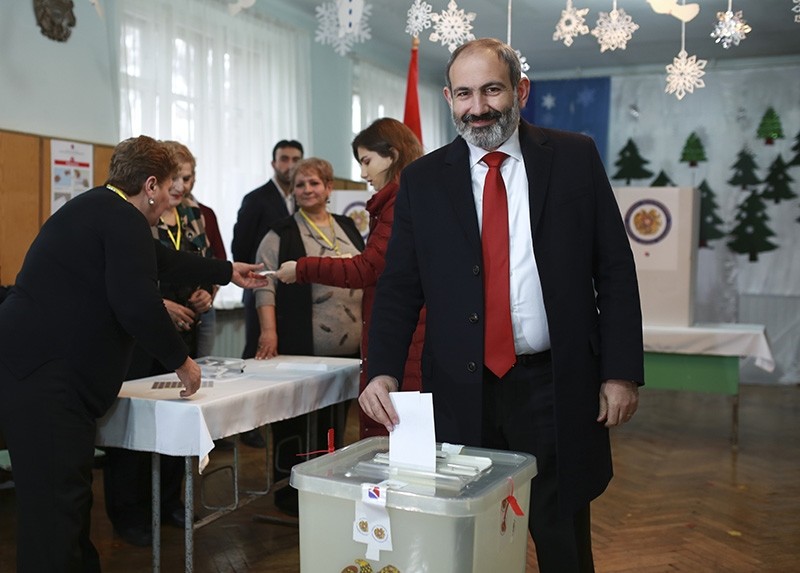 The electoral bloc of Armenia's acting premier Nikol Pashinian was in the lead according to early results in Sunday's snap parliamentary elections triggered by the reformist leader, who is aiming to cement his political authority in the post-Soviet country.

The bloc led by Pashiniayn's Civil Contract party had 70.25 percent of the votes, and in second place with 9.15 percent was the Prosperous Armenia party, according to results from 25 percent of precincts, the central election commission said.

However Pashinian's reform drive was stalled for months by opposition from Sargsyan's ruling party which dominated parliament.

After weeks of political manoeuvring by the prime minister and more street protests, the parliament was dissolved last month.

Pashinian's party is expected to get a majority in the new legislature, allowing him to push ahead with his campaign to reshape the South Caucasus nation's political landscape and spark an "economic revolution."

"We will turn Armenia into an industrial, high-tech, export-oriented country," Pashinian told supporters at a rally last week, pledging "the best elections Armenia has ever seen" and ruling out ballot stuffing and voter intimidation.

Last month, Pashinian stepped down as prime minister to pave the way for snap elections under a clause in Armenian law. He is currently acting prime minister.

Observers expect him to return to the post with his party in control of parliament.

Parliamentary elections had not been scheduled to be held until 2022.

Pashinian has pledged to root out endemic corruption and address widespread poverty, earning him supporters in the impoverished landlocked nation of about three million people.

"He organized this revolution well and intelligently," construction worker Georgi Grigoryan said of Pashinian. "We all hope that now everything will work out well."

On foreign policy, Pashinian has said Armenia will "further strengthen (our) strategic alliance with Russia and, at the same time, step up cooperation with the United States and European Union."

Analysts say Pashinian sought new elections while he is at the peak of his popularity.

In September, his bloc had a landslide victory in municipal elections, winning more than 80 percent of the vote in the capital Yerevan, where nearly 40 percent of the former Soviet Republic's population lives.

"The elections were called on the wave of a revolutionary euphoria," analyst Gevorg Poghosyan told French Press Agency (AFP).

"But after the polls, that sentiment will inevitably weaken and Pashinian and his team will face a reality check."

While many in Armenia have high expectations, others already started to complain about slow progress.

"I will be voting for Pashinian, because I believe he will jail all the corrupt officials who were pillaging the state for many years," Iveta Bakhshyan, a 43-year-old flower vendor in Yerevan, told AFP.

Meanwhile, pensioner Simon Martirosyan, 67, said he will not vote for Pashinian's party because "they failed to achieve any tangible results."

"Nothing has changed in my life during the seven months of Pashinian's rule, people are not better off," he told AFP in Yerevan.

Nine political parties and two electoral blocs are competing for mandates in the 101-seat legislature.

A party needs at least five percent of the votes to get elected in the parliament, while an electoral bloc must clear a seven-percent barrier.

Polls opened at 0400 GMT and will close at 1600 GMT. Results are expected to be released in the early hours on Monday.