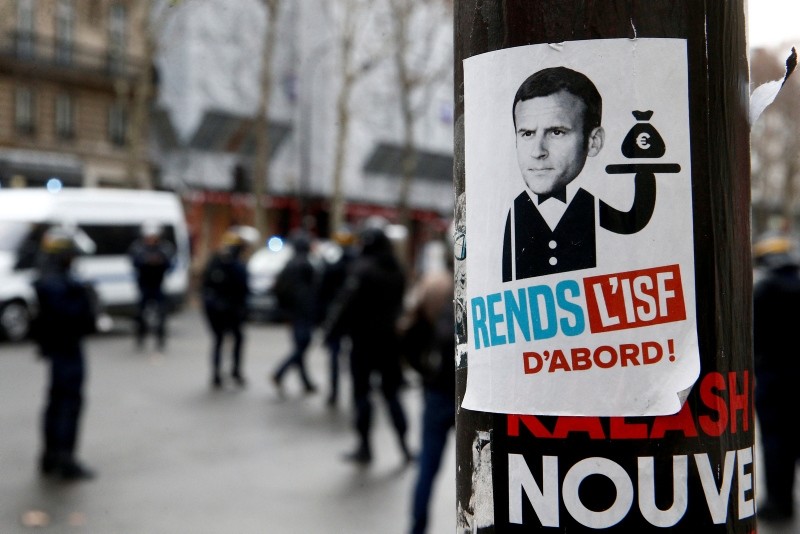 A sticker showing a portrait of French President Emmanuel Macron and the message ,Reinstall the wealth tax, is seen in a street during a national day of protest by the ,yellow vests, movement in Paris, France, December 8, 2018. (Reuters Photo)
by Daily Sabah with Wires Dec 09, 2018 12:00 am

Macron — whose name rang out across the Champs-Elysées as protesters shouted "Macron, resign" — is expected to address the demonstrations in a much-anticipated speech in the coming days.

Calls mounted earlier on the same day for the president to bring an end to the "yellow vest" crisis gripping France as authorities in Paris and elsewhere counted the cost of another day of violent protests and looting.

The interior ministry said 136,000 people had taken part nationwide in Saturday's protests, which turned violent in several other cities including Marseille and Toulouse.

In Paris, around 10,000 "yellow vests" flocked to the Champs-Elysees and other areas — 2,000 more than joined the action last week — as many headed in from other provinces for the first time.

Nationwide, more than 1,700 people were detained, over 1,000 of them in Paris, as police vowed "zero tolerance" for anarchists, far-right supporters and others seeking to cause trouble.

More than 500 people were still in custody in Paris by Sunday morning, officials said.