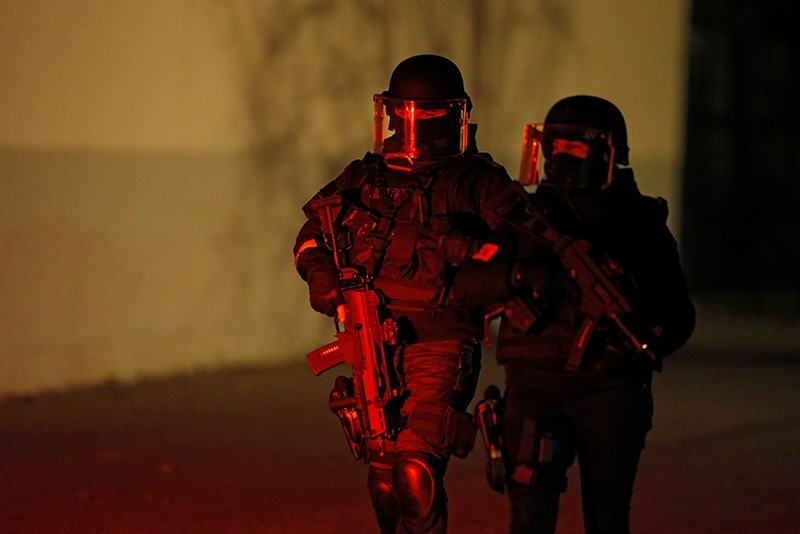 French special police forces secure an area during a police operation in the Meinau district after the deadly shooting in Strasbourg, France, Dec. 13, 2018. (Reuters Photo)
by Daily Sabah with AFP
Dec 13, 2018 12:00 am

French police on Thursday shot dead a gunman who had been on the run since killing three people at Strasbourg's popular Christmas market, a source said.

More than 700 French security forces had been hunting for 29-year-old Cherif Chekatt since the bloodshed on Tuesday night. The source said he was shot and killed by police in the Neudorf area of the city.

Police in several European countries had earlier joined the manhunt for Chekatt, a Strasbourg native.

He was believed to have been injured after exchanging fire with soldiers during the attack, but managed to escape and had not been seen since getting out of a taxi in Neudorf.

Authorities published Chekatt's picture late Wednesday in a bid to track the career criminal who has at least 27 convictions in four European countries.

Police described him as dangerous and urged people not to approach him.

After the report of Chekatt's killing, Daesh terror group's propaganda agency claimed he was one of the group's "soldiers."

In a message on Twitter, the Amaq agency said the attack Chekatt "carried out the operation in response to calls to target nationals of the coalition" against Daesh.

A fifth person was detained by police for questioning on Thursday, in addition to the suspect's parents and two brothers who have been in custody since Wednesday.

French President Emmanuel Macron expressed "the solidarity of the whole country" towards the victims as he arrived for a European summit in Brussels.

"It is not only France that has been hit... but a great European city as well," he added, referring to the seat of the European parliament in the eastern French city that lies on the border with Germany.

Strasbourg's location in the heart of western Europe means that Germany, Switzerland, Belgium and Luxembourg can be easily reached by car or train, making the search for Chekatt more complicated.

Swiss police had reinforced border checks, while German authorities also widely published the photo of the suspect, which showed him with dark hair, a short beard and a visible mark on his forehead.

In 2016, a terrorist responsible for an attack on a Christmas market in Berlin was shot and killed only three days later in Milan in northern Italy after traveling through the Netherlands and France.

The Strasbourg suspect, who lived in a rundown apartment block a short drive from the city center, was flagged by French security forces in 2015 as a possible extremist.

France has been hit by a wave of attacks from gunmen claiming allegiance to al-Qaida or Daesh terror group since 2015, which have claimed the lives of 246 people before Tuesday's attack, according to an AFP toll.