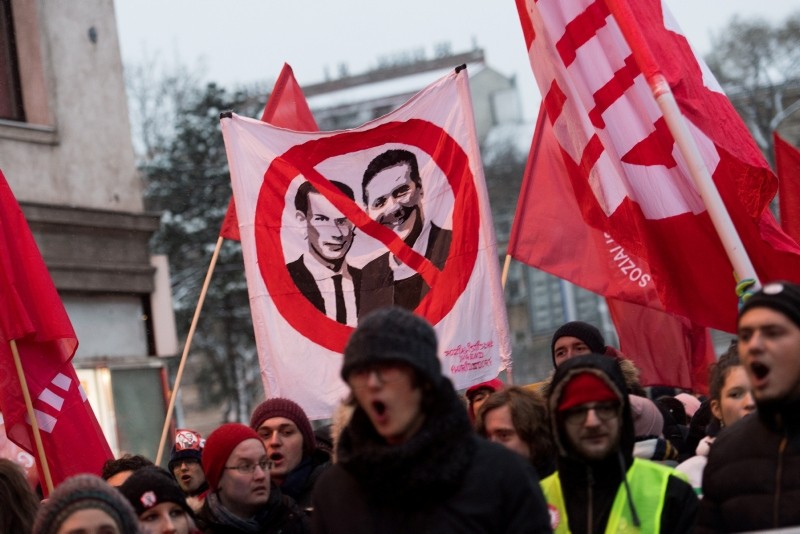 Protesters holding a sign with crossed out faces of Austria's Chancellor Sebastian Kurz of OeVP and Vice-Chancellor Heinz-Christian Strache of FPOe during a protest against the coalition government in Vienna, Austria, Dec. 15, 2018. (EPA Photo)
by Compiled from Wire Services Dec 16, 2018 12:00 am

Thousands of protesters in Vienna braved snow and icy temperatures Saturday to protest Austria's ruling coalition between the conservatives and the far-right a year after they came to power.

Some 17,000 people took to the streets of the capital despite the bad weather, according to police estimates, while organizers put turnout at 50,000.

Many were waving banners reading "Fascists out of the government", "Racism gets on my nerves", and "More love, courage, togetherness", as they made their way through Vienna before gathering outside the Hofburg imperial palace.

The event drew a range of leftist groups including senior citizens known as the "Anti-Right Grannies" and others who brandished old socks, along with signs reading "Racism Socks."

Demonstrators also railed against efforts to ban headscarves for day care and primary school pupils, and against a recent welfare reform.

The rally was held on the eve of the first anniversary since Chancellor Sebastian Kurz's People's Party (OeVP) and its far-right Freedom Party (FPOe) partner took office on December 18, 2017.

Under their leadership, Austria -- which also holds the EU presidency until the end of December -- has introduced a series of tough anti-immigration measures over the past year.

A small number of participants wore yellow vests, like the ones that have been used in the current major protest movement in France.

In the latest move, the government last month finalized the details of welfare cuts aimed at immigrants, in a move criticized by anti-poverty campaigners and church groups.

In addition, the introduction of a voluntary 12-hour work day has drawn criticism from the left-wing opposition.

However, the government plans to work out a tax reform next year to ease the burden on low and middle incomes.

Schieder is the SPOe's lead candidate in the European Parliament election in May 2019, when traditional parties face major challenges from far-right and Eurosceptic populists.

With growth of three percent expected for this year and one of the eurozone's lowest unemployment rates at 5.6 percent, Austria's coalition is still riding high in opinion polls.

Kurz's People's Party won 31.5 percent of the vote in last year's elections, but now scores around 35 percent in the opinion polls.

The Freedom Party, led by Vice-Chancellor Heinz-Christian Strache, has slipped only slightly from the 26 percent of the vote it won last year to around 24 percent.

Vienna police said in a statement that the demonstration went ahead without any incidents.