Macron turns to Sarkozy for help amid 'yellow vest' protests 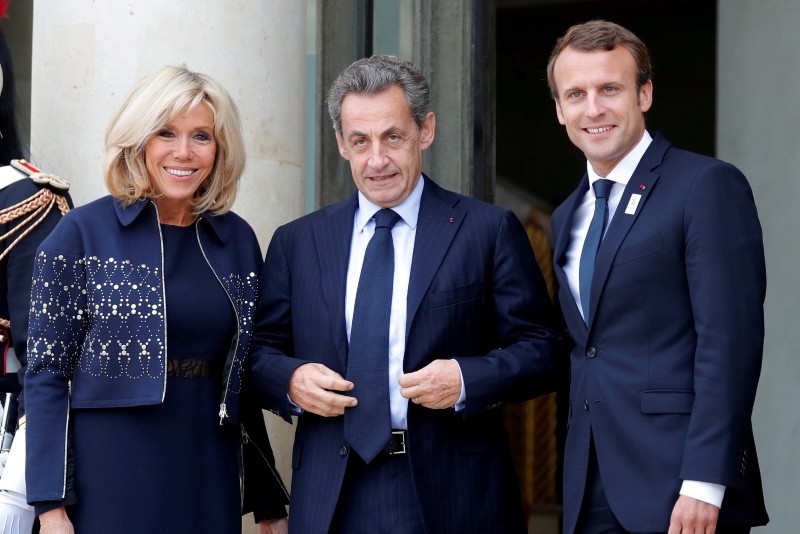 French President Emmanuel Macron (R) and his wife Brigitte Macron greet former French president Nicolas Sarkozy for a ceremony at the Elysee Palace, September 15, 2017. (Reuters Photo)
by Dec 18, 2018 12:00 am
In the midst of the biggest political crisis of his presidency, Emmanuel Macron is enlisting the help of former French president Nicolas Sarkozy, in a sign that the right-wing ex-leader's influence on Macron is on the rise.

In the space of three weeks, Macron, who has struggled to quell a month-long revolt against his reforms, has made two gestures towards Sarkozy, who led France from 2007 to 2012 on a hardline law-and-order platform.

Macron, 40, lunched with Sarkozy at the Elysee Palace on Nov. 30, an Elysee source said, just before the most violent weekend of demonstrations by "yellow vest" protesters who have caused havoc in some of the poshest districts of Paris.

Macron and Sarkozy discussed public order, as well as one of the tax measures Macron announced last week - a tax exemption for overtime work - which was a key plank of Sarkozy's own programme while he was president, Le Figaro reported.

Last Sunday Macron sent Sarkozy to Tbilisi to represent France at the swearing-in of Georgia's new president, a move that caused a stir in French political circles.

Sources close to Sarkozy see it as a way for Macron to send a signal to right-wing voters in France who have been shocked by images of burning cars in up-market areas of Paris and Macron's decision to try to buy off the protesters with costly handouts.

"Emmanuel Macron has understood the personal and political benefit he could draw from (Sarkozy)," said one source close to the 63-year-old former president, whose defeat in conservative primaries in 2016 marked his exit from the political stage.

"In a time of crisis, it's a good idea to keep up relations with those you have points in common with," the source said.

An Elysee official said Macron and Sarkozy had a "cordial, and respectful" relationship, adding that the former president's role during the 2008 Georgian crisis - when he mediated between Russia and Georgia - justified the honour.

But Francois Patriat, a senator and close ally of Macron, suggested the president also had a more immediate political goal in mind.

Only six months ahead of European elections, Macron is keen to undermine Laurent Wauquiez, leader of the conservative Republicans, the biggest opposition party, to which Sarkozy also belongs.

"By sending this signal, Macron is taking a pop at Wauquiez," Patriat said.

Sarkozy has refrained from criticising Macron publicly since his 2017 election, unlike another former president, Socialist Francois Hollande. Macron served as economy minister under Hollande and then ran for the presidency as an independent, all but dashing his boss's hopes of winning a second mandate.

"It's a way for Sarkozy to appear at the centre of the game, while stinging Wauquiez," said Damien Abad, a senior official in the Republicans.