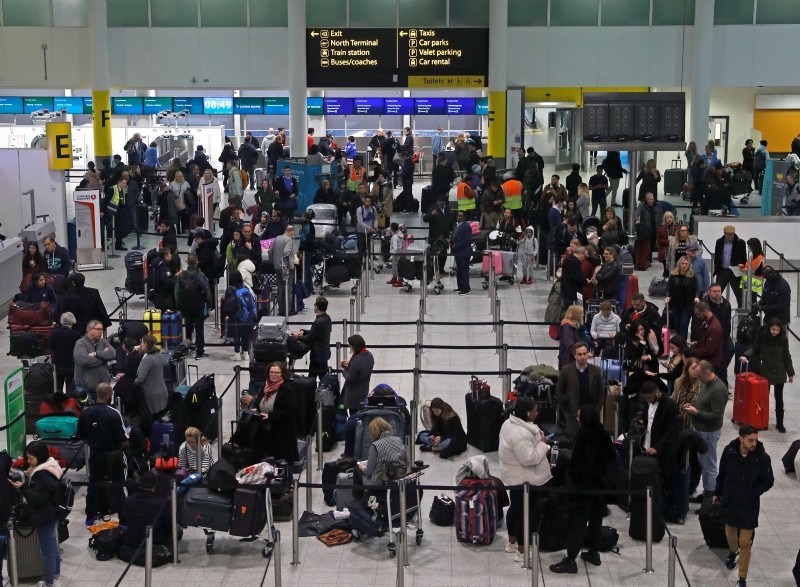 Passengers wait around in the South Terminal building at Gatwick Airport after drones flying illegally over the airfield forced the closure of the airport, in Gatwick, Britain, December 20, 2018. (REUTERS Photo)
by Compiled from Wire Services Dec 20, 2018 12:00 am

Britain's Gatwick Airport reopened on Friday after a rogue drone saboteur wrought travel chaos for hundreds of thousands of Christmas travellers by playing cat-and-mouse with police snipers and the army.

After the biggest disruption at Gatwick, Britain's second busiest, since a volcanic ash cloud in 2010, Gatwick said its runway was open and that a limited number of aircraft were scheduled for departure and arrival.

"Gatwick's runway is currently available and a limited number of aircraft are scheduled for departure and arrival," the airport said.

"Gatwick continues to advise passengers to check the status of their flight with their airline before travelling to the airport as departures and arrivals will be subject to delays and cancellations."

Britain called in the military and police snipers to hunt down the drone and its operator who flew what is thought to be an industrial style drone near the airport every time it tried to reopen.

Flights were halted at 2103 GMT on Wednesday after two drones were spotted near the airfield.

Thousands of passengers were delayed, diverted or stuck on planes Thursday as the only runway at Britain's Gatwick Airport remained closed into a second day after drones were spotted over the airfield.

The airport south of London — Britain's second-busiest by passenger numbers — closed its runway Wednesday evening after two drones were spotted. It reopened briefly at about 3 a.m. Thursday, but shut 45 minutes later after further sightings.

The airport canceled all flights on Thursday and will not reopen before Friday morning at the earliest, the BBC reported.

Police continue hunting for the operators of the large drones which reappeared near the airfield every time the airport tried to reopen the runway.

Passengers were advised to check the status of their flights before heading to the airport, where many slept on floors or formed long lines at information desks.

Chris Woodroofe, Gatwick's chief operating officer, said that roughly 10,000 people had been affected by the shutdown by Thursday morning, including 2,000 whose planes were unable to take off from Gatwick, 2,000 stuck at their points of origin and 6,000 diverted to other airports in Britain, as well as Paris and Amsterdam.

He said at least one drone remained in the area Thursday morning.

"As I stand here, there is a drone on my airfield as we speak," Woodroofe told Sky News.

A police helicopter was hovering near the airfield as officers from two nearby forces hunted the drone operators.

"The police advice is that it would be dangerous to seek to shoot the drone down because of what may happen to the stray bullets," Woodroofe said.

Any problem at Gatwick causes a ripple effect throughout Britain and continental Europe, particularly during a holiday period when air traffic control systems are under strain.

Passengers complained on Twitter that their Gatwick-bound flights had landed at London Heathrow, Manchester, Birmingham and other cities.

Luke McComiskie, who landed in Manchester — more than 160 miles (260 kilometers) from London — said the situation "was just chaos, and they had only two coaches (buses) and taxis charging people 600 pounds ($760) to get to Gatwick."

Gatwick, about 30 miles (45 kilometers) south of London, sees more than 43 million passengers a year to short- and long-haul destinations and serves as a major hub for the budget carrier easyJet.

Gatwick normally operates throughout the night but the number of flights is restricted because of noise limitations. The airport website says it usually handles 18 to 20 flights overnight during the winter months.

Gatwick briefly closed its runway last year when a drone was spotted in the area.

Pilots have reported numerous near-misses with drones in recent years in Britain, and aviation authorities have warned there is a growing risk that a midair collision could cause a major disaster.

Strong sales of small consumer drones have led to repeated warnings about a possible threat to commercial aviation.

Flying a drone near an airport carries a maximum penalty of five years in prison.

Christopher Lister, whose flight from Kiev, Ukraine, to Gatwick was diverted to Birmingham in central England, said the scale of the disruption was "a little bit scary."

"We feel grateful it's not a worse story this morning about an aircraft (that has) come down," he told the BBC.