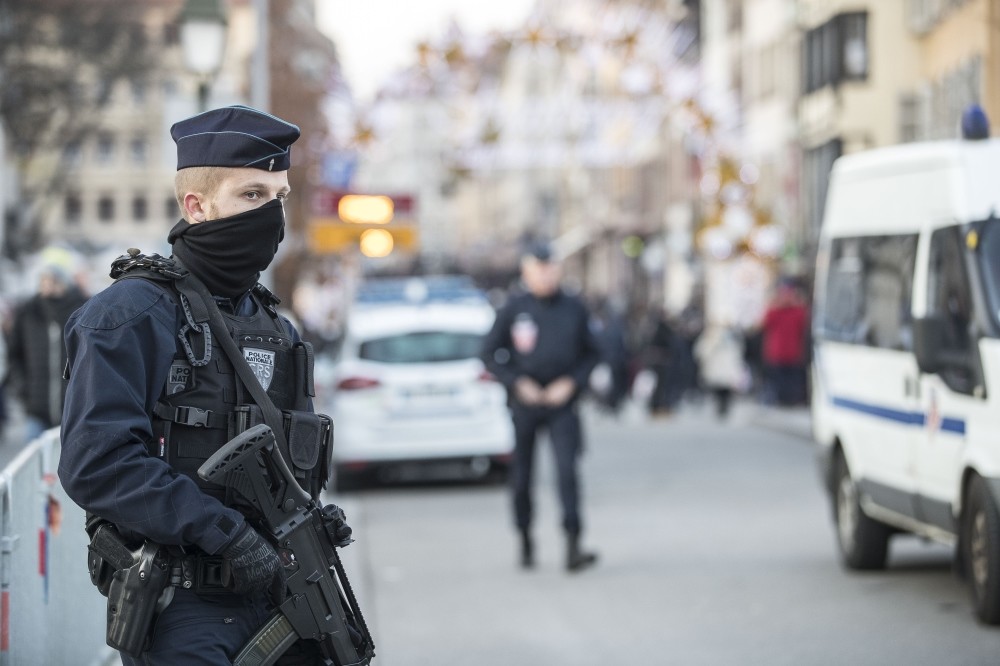 Strasbourg's Christmas market reopens under the protection of police after deadly terror attack, Strasbourg, Dec. 15.
by Compiled from Wire Services Dec 20, 2018 12:00 am

After weeks of 'yellow vest' protests, French President Emmanuel Macron's government is now being threatened by a group of police officers calling themselves 'les Gyros Blues,' or the 'blue lights'

French police have launched a call for demonstrations against French President Emmanuel Macron's government, after weeks of "yellow vest" protests around the country. Calling themselves "les Gyros Bleus," or blue lights, the protest is scheduled for this evening on the Champs-Élysées, at 23.30 p.m.

As it was started on social media networks under the banner #LesGyrosBleus, they also called for yellow vest protesters and other social movements to join them.

"We are supported on TV, but after that, there is nothing," said Guillaume Lebeau, the vice-president of the association MPC (Mobilization of Angry Policemen), as reported by French newspaper Ouest France.

France's national police have long complained about being overworked, under-appreciated and underpaid, and have tried to press their cause in the past to no avail. However, their current high profile has put them in a unique position to negotiate.

The French government on Tuesday proposed giving 300 euro ($340) bonuses to officers deployed to the protests by the yellow vest movement that started in mid-November. French President Emmanuel Macron committed to the idea of protest duty pay earlier this month. However, police representatives, who opened talks on Tuesday with the Interior Ministry, want compensation for years of overtime duty never paid out.

Interior Minister Christophe Castaner has called police into the streets in near-record numbers to counter five Saturdays of yellow vest protests. The movement takes its names from the fluorescent safety vests they don – required equipment in all cars in France. In addition, police are being asked to up surveillance of France's Christmas markets and other sensitive areas after the Strasbourg attack that killed five people. Yesterday, French police started protesting at passport check-in lines in at least one terminal at Charles de Gaulle airport, creating long lines of waiting passengers, according to the Associated Press. The prefecture said police were working but taking their time with "deep checks" of passengers. The Paris Aeroport authority tweeted and posted on its website that "controls at borders may be longer" and advised passengers to allow extra time. The delays came as the Alliance police union called on police officers across France to handle only emergencies amid negotiations with the Interior Ministry for compensation after weeks containing often aggressive protests by a grassroots movement. Paris police deployed for protests organized by student unions on Tuesday. Hundreds of students gathered along Descartes Street and walked toward Republic Square chanting anti-Macron slogans. Police have also been called on for extra duty following a deadly attack last week near the Strasbourg Christmas market that has led to increased surveillance around France.