Chaos in Spain as Catalan separatists scuffle with police 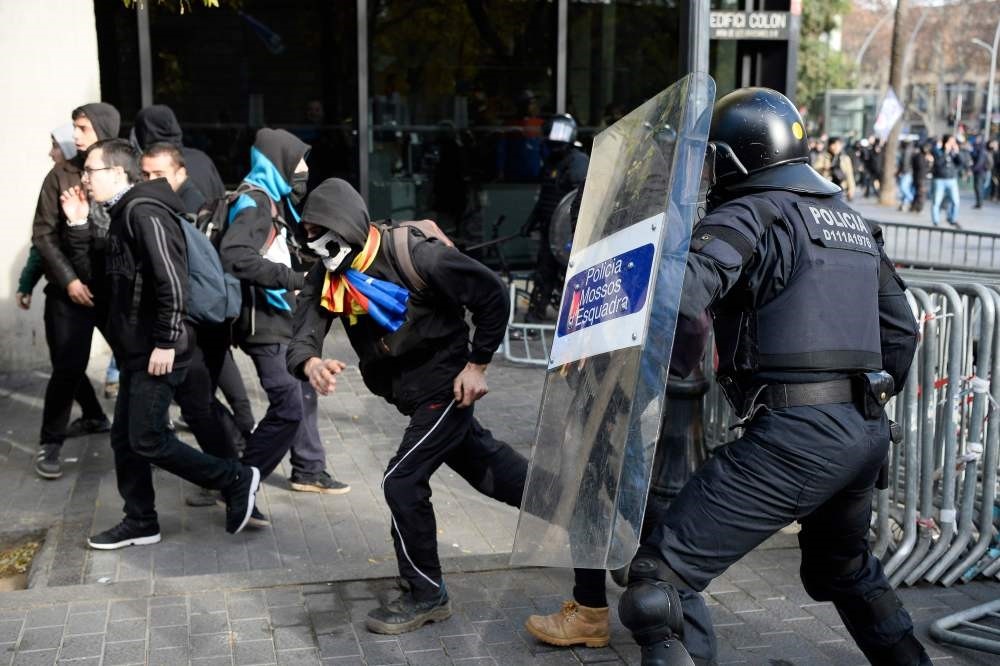 Protesters run for cover from a member of the Catalan regional police force, Barcelona, Dec. 21.
by Compiled from Wire Services Dec 22, 2018 12:00 am

Catalan radical separatists blocked roads and clashed with police in protests against a Spanish government cabinet meeting, which was held in Barcelona for the first time since the crisis broke out

Catalan separatists blocked roads and rallied in their thousands on Friday as Spanish Prime Minister Pedro Sanchez brought a cabinet meeting to regional capital Barcelona in both a show of central power and attempt at negotiation.

During scuffles between radical separatist protesters and police, at least seven people were arrested Friday for disturbing public order, the Mossos d'Esquadra regional police said. The police force said in a tweet that one of the protesters was found with material to make Molotov cocktails, which create small explosions. A TV channel journalist was also attacked by some protesters, the Intereconomia channel said in footage distributed online, as reported by the Associated Press. Several thousand other demonstrators gathered peacefully near the city's Franca rail station. Some held signs reading: "Occupying forces, out," according to Agence France-Presse (AFP).

Grassroots separatist groups and unions called the protests to show their disgust at Spanish Prime Minister Sanchez's decision to lead his weekly Cabinet meeting in Barcelona for the first time since the crisis began. Socialist leader Sanchez's decision underlined Madrid's opposition to full independence. But it was also part of a strategy to secure the survival of his minority government with the aid of Catalonian pro-independence parties by offering them some more autonomy. The Spanish government aimed to use the cabinet meeting to approve a 22 percent increase in the minimum wage, a pay hike for public workers and announce investments in infrastructure projects in Catalonia, including renaming the Barcelona airport in honor of Josep Tarradellas, who headed the Catalan government in exile during Gen. Francisco Franco's dictatorship. But the timing of the meeting was delicate: a year to the day after Madrid held snap elections in the region after blocking its move for independence.

Sanchez took office as prime minister eight months later after winning a surprise vote of no-confidence against the previous conservative government with the support of Catalan separatist parties. Sanchez initially adopted a more conciliatory tone towards Catalonia than his conservative predecessor but the effort to ease tensions with the region has hit a wall. Sanchez and the head of Catalonia's separatist government, Quim Torra were photographed holding talks in Barcelona on Thursday night, drawing fire from the premier's political opponents as well as separatists. The parliamentary leader of the conservative opposition Popular Party, Dolors Montserrat, branded the meeting "shameful" and "a betrayal of Spain." Sanchez has proposed giving Catalonia more powers while Torra wants a legally binding referendum on independence.