UK police arrest 2 for 'criminal drone use' at Gatwick airport 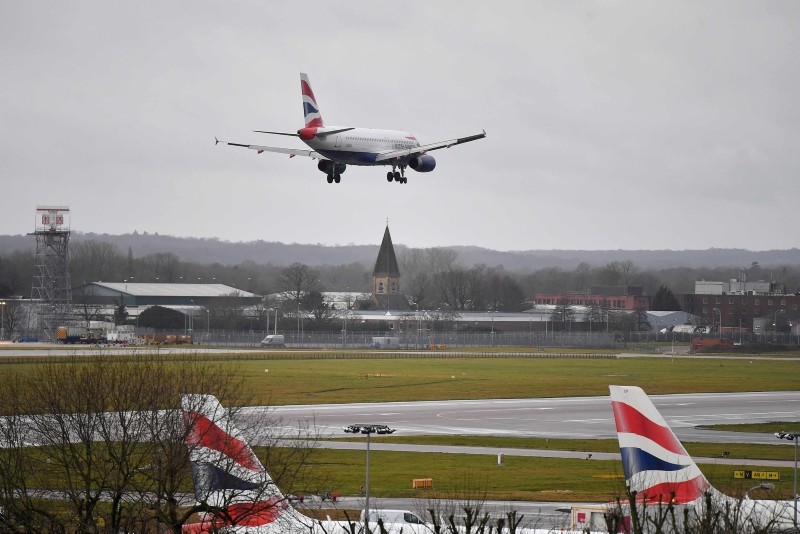 A British Airways Airbus 320-232 aircraft prepares to land at London Gatwick Airport, south of London, on December 21, 2018, as flights resumed following the closing of the airfield due to a drones flying. (AFP Photo)
by Associated Press Dec 22, 2018 12:00 am

British police say two people were arrested early Saturday morning for suspected "criminal use of drones'" in the Gatwick Airport case that has created nightmarish holiday travel delays for tens of thousands of passengers.

Sussex police did not release the age or gender of the two suspects arrested late Friday night and did not say where the arrests were made. The two have not been charged.

"Our investigations are still ongoing, and our activities at the airport continue to build resilience to detect and mitigate further incursions from drones by deploying a range of tactics," he said.

New drone sightings Friday had caused fresh problems for holiday travelers at the airport, which reopened in the morning after a 36-hour shutdown only to hastily suspend flights for more than an hour in the late afternoon on one of the busiest travel days of the year.

The reopening, closing and re-reopening of Britain's second-busiest airport due to repeated drone sightings raised a host of questions for British officials, including questions about how safe it really is to fly with drones around and why it took so long to make arrests.

The latest drone sighting came after British police and transport officials said extra measures had been put in place to prevent drones from intruding on the airport, which serves 43 million passengers a year.

Military forces with special equipment have been brought in and police units are working around-the-clock. Police say a sophisticated drone operation is targeting the airport to cause maximum disruption during the holiday rush.

The motive for the drone invasion wasn't clear but British police said there are no indications it was "terror related."

Gatwick reopened at about 6 a.m. Friday after having been shut down Wednesday night and all day Thursday after authorities said drones repeatedly violated the airport perimeter, threatening the safely of incoming and outgoing planes.

Transport Secretary Chris Grayling said Friday morning there had been about 40 sightings of "a small number of drones" while the airport was shut down. He told the BBC that the drone disruption at Gatwick was "unprecedented anywhere in the world."

Grayling said additional "military capabilities" and a range of security measures had been put in place overnight but would not elaborate. He said the airport was considered safe for flights Friday even though the drone operator or operators had not been apprehended.

The Thursday shutdown upended the travel plans of tens of thousands of passengers, since about 110,000 people had been scheduled to pass through Gatwick that day.

After flight operations restarted Friday, the airport struggled to resolve a massive backlog of passengers and canceled, delayed or diverted flights. The number of passengers expected Friday was even higher than the previous day, and about 145 of Friday's 837 scheduled flights at Gatwick were cancelled to handle the crush.

Then Gatwick takeoffs and landings had to be suspended again as a "precaution" after reports that a drone was spotted about 5:10 p.m., the airport said.

Planes circled over London or sat at Gatwick gates, waiting to find out what would happen Friday night, before getting a new "all-clear" about 70 minutes later.

"The military measures we have in place at the airport have provided us with reassurance necessary to reopen our airfield," the airport tweeted moments after flights resumed.

The hundreds of travelers who were stuck overnight at Gatwick by Thursday's closure described freezing conditions as they slept on benches or the airport floor. Many complained they weren't being kept informed about re-routed flights.

British officials, meanwhile, were debating whether shooting down a drone was an available "tactical option" due to concerns that such an action could inadvertently hurt people on the ground.

"Shooting the drone out of the sky is probably one of the least effective options" available, said Assistant Chief Constable Steve Barry of Sussex Police.

He said police believe there was more than one drone operating around Gatwick in the last two days and that it was possible the drones were being operated from fairly far away.