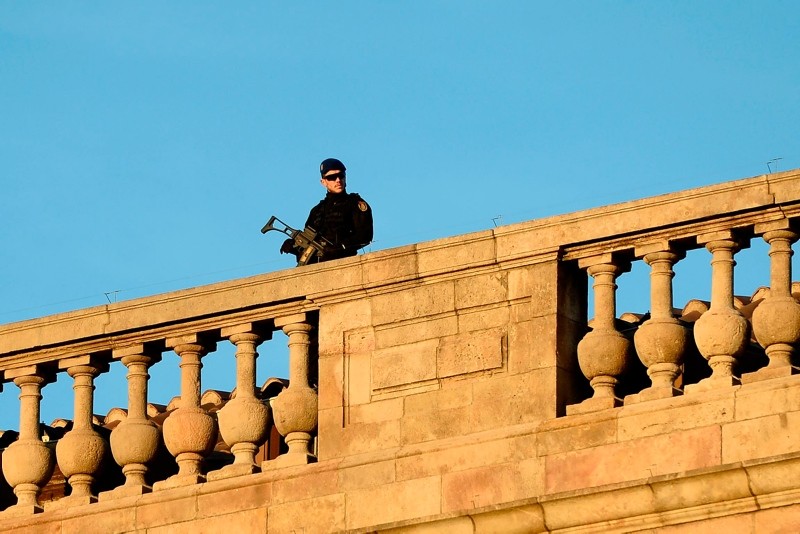 A police officer keeps watch on the rooftop of the Llotja de Mar where the Spanish cabinet will be meeting in Barcelona, Spain, Dec. 21, 2018. (AFP Photo)
by Compiled from Wire Services Dec 24, 2018 12:00 am

Security is high in Barcelona following a U.S. warning of the risk of a terror attack during the Christmas and New Year's holidays.

The security alert, posted online and sent to U.S. citizens in Spain's second-largest city, recommends exercising "heightened caution" around buses and public transport in the Las Ramblas area. Barcelona's downtown boulevard, beloved by tourists and residents, was targeted last year during an attack claimed by Daesh terrorists that killed 14 people.

The regional Mossos d'Esquadra police declined to comment Monday directly on the alleged threat, saying only that security had been heightened "as part of a previously arranged anti-terrorist vigilance for the Christmas period."

Asked about the warning during an interview with Rac1 radio on Monday, Catalonia's regional Interior Minister Miquel Buch said police "were working on this threat".

"We take seriously all threats, all of them are investigated," he added, without giving further details.

Barcelona-based daily El Periodico de Catalunya said Catalan regional police had circulated an internal note that the man could try to drive a bus into crowds in Barcelona.

Contacted by French Press Agency (AFP), a spokesman for the regional police force in Catalonia did not confirm police were seeking a Moroccan man but said a "temporary reinforcement of security measures in areas of high concentration of people" was in place.

Spain's Interior Ministry said the level of anti-terror alert in the country remained at the second-highest level, unchanged since 2015.