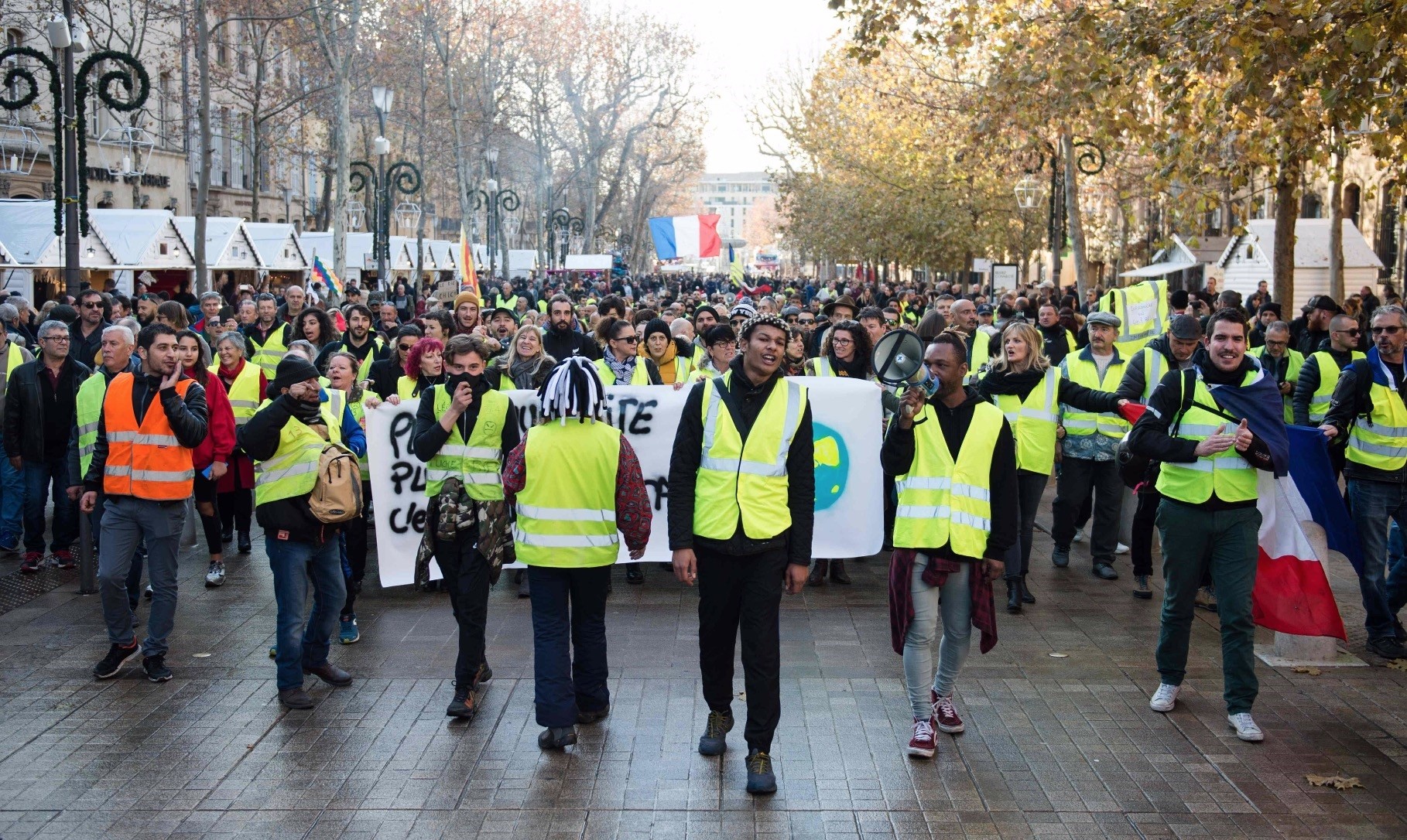 The yellow vest revolt in France over the high cost of living has sparked copycat protests worldwide.
by Daily Sabah with Wires Dec 25, 2018 12:00 am

In a 75-second video clip published on the website of Aufstehen (Stand up) movement, she said that Germans also need to raise their voices neglected by politicians for many years. Wagenknecht's Twitter account was blocked, after giving the yellow vest message to the German people.

"I think we also need such pressure in Germany," Wagenknecht said in her video. Taxes, pensions and wages also "are always policies for wealthy clients and large companies," she said, as reported by the German newspaper, Der Tagesspiegel. "There must be more resistance in Germany, and here too we need many people who are ready to go the street," she said.

German Chancellor Angela Merkel earlier referred to the far-left Die Linke party's support for France's yellow vest movement as "scandalous." Speaking in parliament, Merkel slammed the party's members for having "said nothing about the violence that has been employed on the streets" during the anti-government protests in France. Merkel also called on the far-left party to distance itself from the riots.

However, the attitude of the left to the protest movement is not clear. Die Linke's Wagenknecht said the French protests were a role model for Germany, while party leader Bernd Riexinger said "fraternization" between left and right-wingers in the yellow vest movement was worrying.

In September, Wagenknecht launched the new political movement, Aufstehen, saying the people of Germany "no longer feel represented by those in power." "In a country where, despite economic growth, 40 percent of residents have less net income than 20 years ago, democracy is no longer working," Wagenknecht said, speaking at a press conference in Berlin.

According to the German Socialist Equality Party (SGP) reports, many German workers have had an affinity for the yellow vest protests in France. Since mid-November, protesters wearing yellow safety bibs have taken to the streets and blocked roads and roundabouts around France. The protests led to huge rioting and clashes in Paris earlier this month. The largely leaderless movement initially opposed planned fuel tax rises, now canceled, but has since raised a wider range of demands including higher wages, tax cuts and a constitutional amendment to allow voters to initiate referendums on policy issues.

On Friday, France's parliament approved a spending package meant to placate the yellow vest protesters. The legislation calls for overtime pay to be exempt from taxes and ancillary employment costs from next year.

France's prime minister met yesterday with police officers targeted by violent yellow vest protesters, in a show of support amid growing concerns about growing brutality from both sides over the weekend.