Over 2,200 migrants died crossing the Mediterranean in 2018 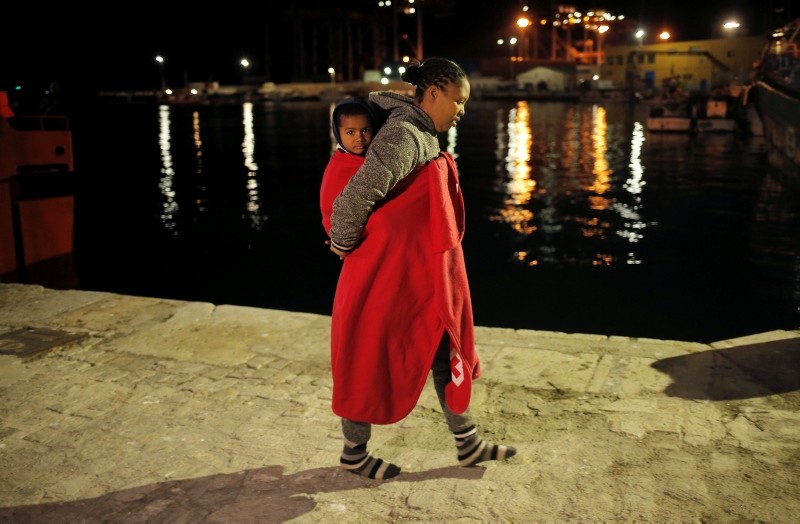 A migrant woman carries a child, intercepted off the coast in the Mediterranean Sea, after disembarking a rescue boat at a port on Christmas Eve in Malaga, southern Spain, December 24, 2018. Picture taken December 24, 2018. (Reuters Photo)
by Daily Sabah with Wires Dec 27, 2018 12:00 am

A total of 2,241 illegal immigrants have died in the Mediterranean Sea as of Dec. 21 since the beginning of the year, the International Organization for Migration has announced.

While Greece and Italy were the primary arrival countries since 2015, the significant drop of entries has left Spain with a near 50 percent handling of all illegal arrivals of immigrants in the European Union. Furthermore, 56,480 entered Spain in 2018, compared to 31,310 in Greece and 23,126 in Italy.

In a statement, the Spanish Refugee Aid Commission (CEAR) said Thursday that the number of illegal immigrants who died in the Mediterranean remains unacceptably high.

The number of illegal migrants who died on the route to Europe was 3,319 in 2017, 5,096 in 2016 and 3,771 in 2015. It should be noted that the big wave of immigration did not start until September of 2015, when German Chancellor Angela Merkel decided to de facto "open the floodgates" to the European Union.

While CEAR called on European politicians to end "discourses on fear and hatred," as have other nongovernment organizations, little seems to be underway in regard to the EU, whose administration probably fears further political backlash from such countries as Poland and Hungary as well as other Eastern European countries, but Italy in particular, which has shut down its ports to all self-proclaimed nongovernmental organization (NGO) "rescue ships."

Athens in 2015 and 2016 did not receive much political condemnation for its handling of the crisis, at least not compared to Rome.

Both the previous and the contemporary, more hardline Italian governments took action to quell the number of arrivals.

In fact, Italy took legal action against several organizations that were verifiably and unquestionably, illegally ferrying people from the shores of North Africa to the borders of Europe throughout the height of the crisis.

The revelation came after data of ship maneuvers and maritime traffic, which was already publicly available, was widely circulated the internet, causing an uproar. The data clearly showed nongovernmental organization's ships making regular trips to and from Libya and Italy's Sicily.

Further accusations involve the claim that these organizations outright cooperated with local human traffickers, who had extorted money from the immigrants, in order to better coordinate the transportation of people between the two continents.

The organizations continue to deny any wrongdoing; however, the Italian government, as well as Malta, remain rigid in their decision to shut down their ports, which has perhaps contributed to the lower death toll this year, as presumably fewer immigrants attempt the treacherous journey across the Mediterranean.

However, the latest hot-button issue revolving around illegal immigration through "Mare Nostrum" has been the story of a German NGO's ship which for about a week has been attempting to force its way into an Italian port with increasingly heated rhetoric against Berlin and Rome. The vessel, Sea Watch 3, which flies the Dutch flag and is currently positioned off the Libyan coast, has been urgently requesting access to unload its illegal migrants into either an Italian or a Maltese port to no avail.

As with all other cases, Italian authorities remain firm on the matter, as Italy is currently dealing with an estimated 500,000 to 800,000 illegal immigrants on its own.

A spokesman for the German organization, Ruben Neugebauer, went as far as to call out the German interior minister, Horst Seehofer, and even questioned the legitimacy and right of individual nations shutting their borders, saying that these were not "Maltese or Italian border[s]," but "a European border."