Thousands turn up for fourth week of protests against Serbia's Vucic 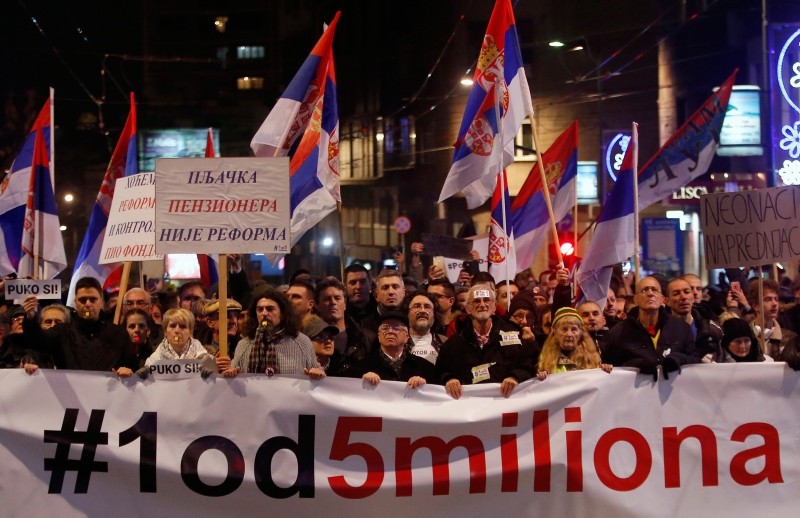 Serbian protesters piled more pressure on President Aleksandar Vucic Saturday as thousands turned out for a fourth week of anti-government demonstrations in Belgrade.

Held under the slogan "only one out of 5 million," around 25,000 people joined the rally and demanded the resignation of Interior Minister Nebojsa Stefanovic.

Also attending the protest was Serbian actor Branislav Trifunovic, who made a statement demanding a thorough investigation on the death of Kosovar Serbian politician Oliver Ivanovic, who was assassinated in late November, and attacks on journalists, as well as more room for the opposition.

The protesters made noisy stops in front of the RTS state broadcaster's building and the Serbian government.

They carried banners saying "I'll not shut up," "I'm not stupid" and "why are we fighting with all neighboring countries," among other slogans, while blowing whistles, which became popular in protests against the former strongman president Slobodan Milosevic 20 years ago.

The organizers evoked the mood of the anti-Milosevic protests that ended with his fall in 2000, by playing music from those protests from a truck with speakers that led the march.

The recent discontent was sparked by an assault on an opposition politician, Borko Stefanovic of the Serbian Left (Levica Srbije), was beaten by thugs ahead of a political gathering in central Serbia's Krusevac last month. Government opponents say the attack resulted from hate speech fostered by Vucic's administration. The protests began in late November and initially took place under the slogan "stop to bloody shirts."

The focus has since expanded to include corruption and the media, which is in Vucic's firm grip.

Although the crowd has grown with each demonstration, the movement has no visible leadership, nor any demands or program.

"This is a citizen's demonstration against the situation in the country, which has been economically and politically complicated, even critical, for a long time," protester Vladimir Tosic told AFP.

He and most other demonstrators marched without incident or overt signs of political affiliation in the center of the capital, with some chanting "Vucic, thief" or waving placards that said "Enough lies."

Many blew whistles, a symbol of Serb protests since former strongman Slobodan Milosevic held power in the 1990s.

Tosic, who is in his 50s, said the latest protest "united normal Belgrade inhabitants who have come out to voice despair with the situation."

The rally ended without incidents.

Vucic, a hardline nationalist-turned-European, is accused by the opposition and civil society of having established autocratic rule and total control over media, using them to campaign against opponents.

The protests represent the biggest challenge to his rule so far.

The opposition Alliance for Serbia (SZS), an umbrella of some 30 parties and organizations from across the political spectrum, accused the attackers of being supporters of Vucic's ruling Serbian Progressive Party (SNS), a claim the authorities denied.

Commenting this week on the protests the Serb president said he was "ready to listen to the citizens who are demonstrating but not to opposition liars."

In its latest report on Serbia, the European Parliament "strongly" encouraged authorities in Belgrade to "improve the situation regarding freedom of expression and freedom of the media".

Officially, Vucic has a largely ceremonial role, but he wields a lot of power in Serbia and openly participates in governing.

His SNS has dominated parliament in three elections since 2012. Vucic started a five-year term as president last year.

The Serbian opposition, weakened by infighting, corruption scandals and low exposure on state and pro-government media since Vucic took over, has been marginalized.

Vucic earlier suggested he was willing to test his party's popularity in a snap vote, although Vuk Jeremic, a former foreign minister and the head of the small People's Party, part of the alliance, said the opposition would boycott any election.

"There will be no legitimate elections in Serbia with the participation of the opposition until after normal conditions for elections and living are created," Jeremic said.

According to a poll by the Belgrade-based CESID election watchdog in October, Vucic's SNS enjoys the backing of 53.3 percent of electorate while other parties are trailing far behind.

If the opposition ran as an alliance, rather than individual parties, they could count on around 15 percent of the vote. Their joint participation in a vote has yet to be agreed and so far they are only united in their animosity to Vucic and his party.

The SNS-led ruling coalition has a comfortable majority of 160 deputies in the 250-seat parliament. The next national election is due in 2020.

Most of current opposition leaders served in successive pro-Western coalitions that led Serbia between 2000 and 2012 when SNS forged a coalition with Milosevic's Socialists and came to power.