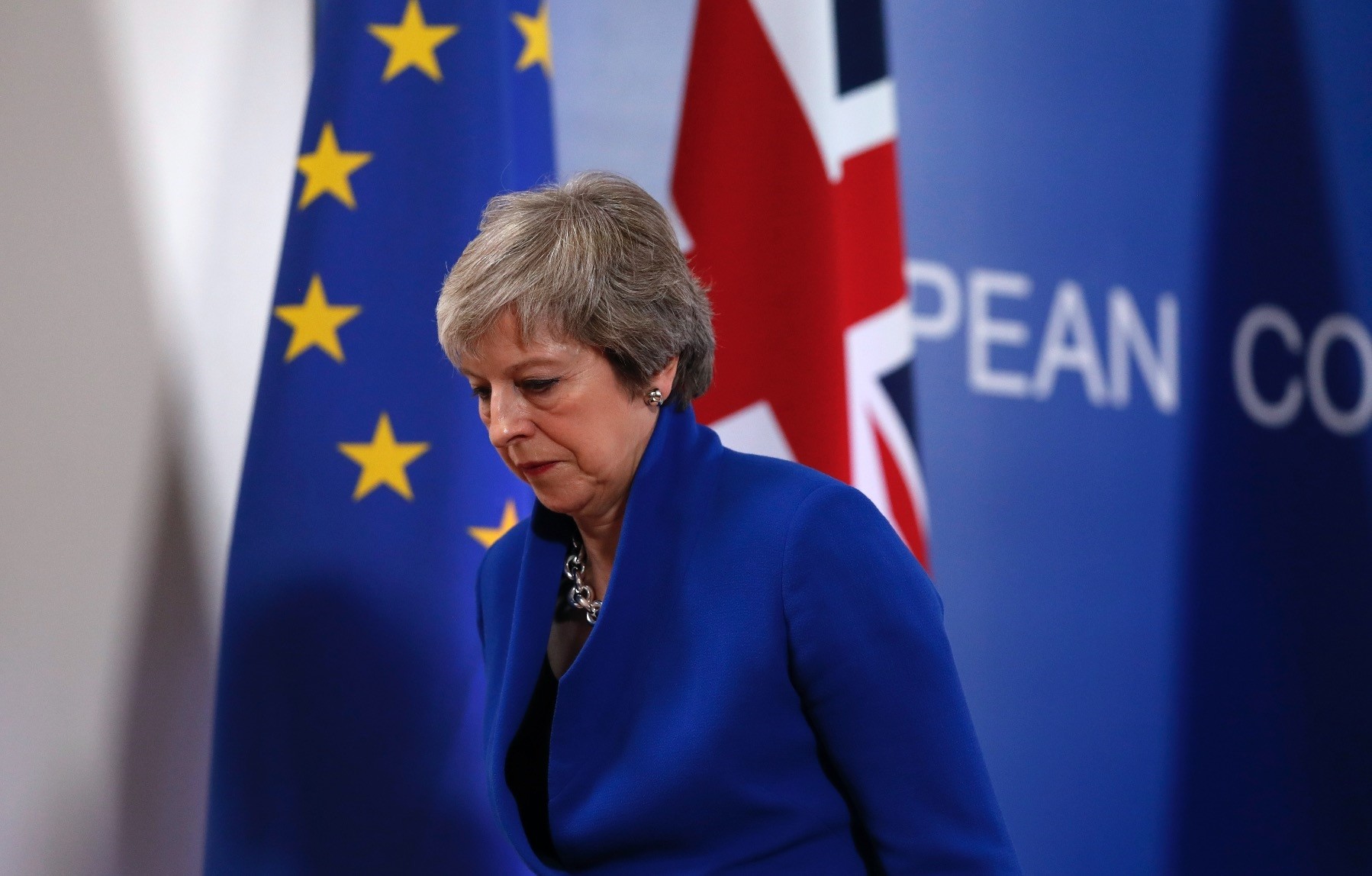 British Prime Minister Theresa May leaves the podium after a media conference, Brussels, Nov. 25.
by Angelos Berberakis Jan 02, 2019 12:00 am

The previous year certainly did the British prime minister's government no favors, and the new year doesn't yet seem ready to provide good tidings either

While Prime Minister Theresa May has faced a fair share of difficulties since she took office, 2018 was one of the hardest years for her government yet.

With only a few months left before March 29 to negotiate a proper exit deal with the European Union, people and politicians alike are talking about the increasing chance of exiting without a deal.

Some have argued that this would benefit the United Kingdom, saying that the EU needs it more in order to maintain stability rather than the U.K. needing it.

Others say that a no-deal exit would be disastrous for the British economy, and that the U.K. cannot hope to remain competitive away from the bosom of the EU; and for those who hoped for a Norway or Switzerland model for the country in terms of its economic relations with the bloc, it is already too late to negotiate such deals.

Regardless of whether the U.K. will exit with a deal or no, it is unlikely that both sides will be satisfied, as Brexiteers fear that a deal with the EU can only mean the U.K. would not be entirely independent, and that it would be a cop-out on the 2016 vote. Remainers, on their side cannot, shake the feeling of looming disaster should there be a hard, no-deal exit.

However either side of the isle might be feeling, it is apparent to both that neither choice will be easy as political problems with the process seem to be sprouting daily.

The latest Brexit-related conundrum is related to the U.K.'s finance minister, Chancellor of the Exchequer Philip Hammond, who, according to a report published by The Telegraph newspaper late Sunday, has been accused by his fellow cabinet members of holding back the release of critical documents that would allow for key funding of British agencies should the country fail to reach an exit deal with the EU.

British Communities Secretary James Brokenshire wrote to the Treasury regarding this matter to lament the fact that his department was given less than half of what had been requested for helping councils prepare for Brexit, an amount of just 35 million pounds.

At least one more department has made similar complaints to Hammond, pointing to his failure to provide them with additional funds, according to The Telegraph's report.

Brokenshire added that his department would not be able to prepare accordingly for any exit scenario, be it with or without a deal, due to a severe lack of funding.

Another member of the May's cabinet, Secretary of State for International Trade Liam Fox, a leading Brexiteer, said over the weekend that there's a 50-50 chance Brexit may be entirely stopped if the House of Commons reject's the government's divorce deal with the EU come next month.

"If we were not to vote for that, I'm not sure I would give it [Brexit] much more than 50-50," he told Sunday Times newspaper.

Members of parliament are set to vote on the government's proposed deal come Jan. 14.

Meanwhile, Labour's own Jeremy Corbyn has stated that if he won a snap election in 2019, his government would renegotiate Brexit, which was a blow to many party supporters who wish for an outright second referendum.

"It would be a matter for the party to decide what the policy would be, but my proposal at this moment is that we go forward, trying to get a customs union with the EU, in which we would be able to be proper trading partners."

Corbyn, ideologically a member of the far-left with little love for the EU, has been reluctant to support another referendum, probably fearing that it could spark a legal crisis and call into question the legitimacy of any referendum.

European Commissioner for Budget and Human Resources Günther Oettinger gave his opinion on the matter last Thursday, saying that there is still a good chance British Parliament votes in favor of an exit deal with the EU and questioned whether much public support for a hard Brexit exists within the U.K.

Despite Oettinger's opinion, polls seem to show that public opinion is actually very much divided over the matter of a "soft" or "hard" Brexit, mostly due to the fact that the two concepts mean different things to different people as was shown by Opinium Research reports in 2018. Things in the House of Commons are slightly different, however, as it doesn't seem those who wish for a no-deal Brexit are in the majority.

"Nevertheless, I assume that it will come to an exit at the end of March," Oettinger concluded.