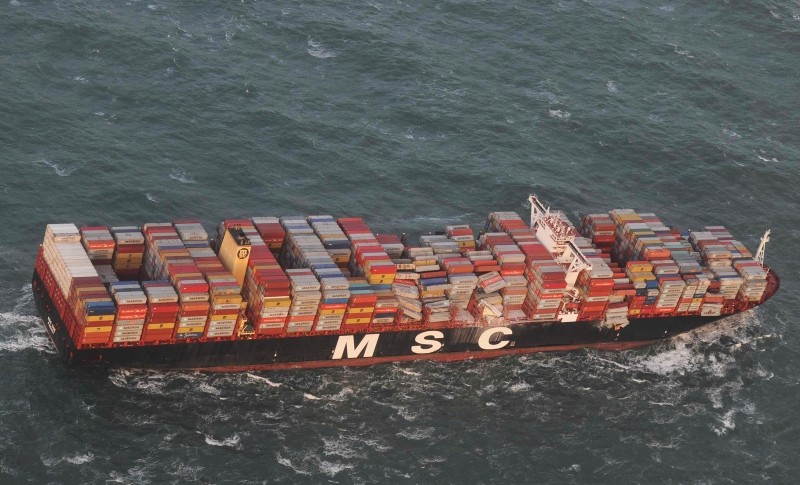 Dozens of containers with items including flat-screen televisions have washed up on Dutch islands in the North Sea after a ship lost part of its cargo in heavy seas, bringing a windfall for local treasure hunters.

The Dutch Coast Guard said up to 270 containers had fallen off the Panamanian-flagged MSC ZOE, one of the world's biggest container ships, in rough weather near the German island of Borkum and floated southwest toward Dutch waters.

Containers broke open on the shores of the Dutch islands of Terschelling and Vlieland. Others were floating or stranded off the coasts of Ameland and Schiermonnikoog, part of a chain of islands that guard the Dutch coast.

Dutch media reported that local treasure hunters had found an array of items from containers whose contents had spilled, including light bulbs, car parts, Ikea furniture, clothing and toys.

Local media carried pictures of groups of people congregating around beached blue containuers and one carrying off what appeared to be a flatscreen TV still packed in foam.

Such material is considered flotsam, and residents of the islands have a centuries-old tradition of collecting it.

It was unclear if the goods were water-damaged.

The mayor of the island of Vlieland, Tineke Schokker, said that the municipality doesn't mind scavenging.

"It's just really nice of people," she told local news agency ANP. "Processing it would cost more than the stuff is worth, and anyway with the two officers we have it would be impossible to guard, the stuff is littered over the whole beach."

A spokesman for the ship's operator, MSC, had no immediate comment.