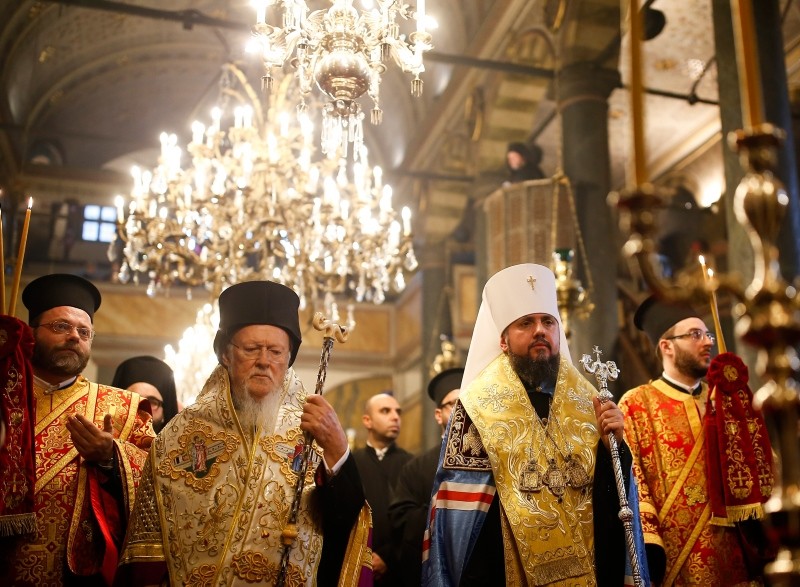 Patriarch Bartholomew I (L) and Metropolitan Epiphanius, the head of the independent Ukrainian Orthodox Church, walk together during their meeting to sign the ,Tomos, decree at the Patriarchal Church of St George in Istanbul, Jan. 5, 2019. (AP Photo)
by Daily Sabah with Wires
Jan 05, 2019 12:00 am

Patriarch Bartholomew I, the spiritual leader of the world's Orthodox Christians, recognizes the Ukrainian Orthodox Church in Istanbul, a move that would raise further tensions with neighboring Russia

Fener Greek Orthodox Patriarch Bartholomew, the spiritual head of Orthodox Christians worldwide, officially recognized the creation of a unified church independent of the Moscow Patriarchate on Saturday in Istanbul, a move Russia has long campaigned against.

Bartholomew I handed over an official decree, called a "tomos," to Primate Metropolitan Epiphanius, in a ceremony that also coincides with one of the most important celebrations for Orthodoxy, the Epiphany.

"The pious Ukrainian people have awaited this blessed day for seven entire centuries," Bartholomew I said in his address.

The patriarch, who is considered "first among equals" in Orthodox Christianity, said Ukrainians could now enjoy "the sacred gift of emancipation, independence and self-governance, becoming free from every external reliance and intervention."

President Petro Poroshenko attended the service in the patriarchate's St. George Cathedral with his family. "I want to thank the millions of Ukrainians around the world who responded to my appeal to pray for the church to be established," Poroshenko said at a ceremony accompanied by solemn liturgical singing.

"I want to thank the generations of Ukrainians who dreamed...and finally God sent us the Orthodox Church of Ukraine," he told the congregation in the crowded church.

In the latest of a series of confrontations between Ukraine and authorities in Russia, Metropolitan Epiphanius, a 39-year-old bishop from the Kiev Patriarchate, was elected as the leader of the new autocephalous Ukrainian Orthodox Church during a vote that was held at a closed-door synod on Dec. 15, 2018 in Kiev's St. Sophia Cathedral, built by the son of Prince Volodymyr whose baptism in 988 led to the spread of Christianity in the region. The move was compared to Ukraine's referendum for independence from the Soviet Union in 1991 by Poroshenko.

Ahead of the vote, the Russian Orthodox Church called on the United Nations, the leaders of Germany and France, the pope and other spiritual leaders to protect Orthodox believers in Ukraine. president Vladimir Putin warned of possible bloodshed in his annual news conference.

Last November, the synod of the Ecumenical Patriarchate, the seat of the spiritual leader of some 300 million Orthodox Christians worldwide, gathered in Istanbul in a bid to approve an official tomos, granting the Ukrainian Orthodox Church autocephaly. Under the leadership of Ecumenical Patriarch Bartholomew I, the patriarchate announced in October that it would grant autocephaly, or independence, to the Ukrainian Church. The decision ended more than 300 years of Moscow's control over Orthodox churches in Ukraine and affects millions of believers in Russia and Ukraine.

Since the late 1600s, the Orthodox Church in Ukraine had been a wing of the Russian Orthodox Church rather than being ecclesiastically independent. Many Ukrainians, however, resented the implication that Ukraine was a vassal of Russia. The move raises deep concerns about what will happen to the approximately 12,000 churches in Ukraine that were under the Moscow Patriarchate. In recent years, about 50 churches in Ukraine under the Moscow Patriarchate have been forcibly seized and transferred to the Kiev Patriarchate, according to Metropolitan Antony Pakanich.

Under Ukrainian President Petro Poroshenko, Ukraine has pushed to establish a national church and thereby sever centuries-old ties with the Russian clergy. Kiev authorities say the step is essential to tackle Russian meddling on its soil. The move came amid increasing tensions between Moscow and Kiev as the two countries continue trading blame for the worst crisis in years over the Kerch Strait. Ukraine imposed martial law in November, citing the threat of a full-scale invasion after Russia captured three of its vessels in the crisis.

Since Moscow's annexation of the Crimean peninsula in 2014 and the ensuing conflict with pro-Russia separatists in eastern Ukraine, Kiev has been wary of the influence of Patriarch Kirill, who is an avid supporter of the Kremlin's policies. The issue has played a key role in Ukraine's presidential elections on March 31, with incumbent President Poroshenko making independence from the Russian Orthodox Church a key issue as he plans a re-election bid.

Kiev says Moscow-backed churches on its soil are a Kremlin tool to spread propaganda and support fighters in the eastern Donbass region in a conflict that has killed more than 10,000 people. On Dec. 20, Ukrainian MPs passed a law that could force the church to add "Russian" to its name. The churches strongly deny this.

Russia bitterly opposes the split, comparing it to the Great Schism of 1054 that divided western and eastern Christianity. Russian Orthodox Patriarch Kirill made a last ditch appeal against the process last month.