No EU country offers refuge as migrants stranded off Malta dehydrated, not eating 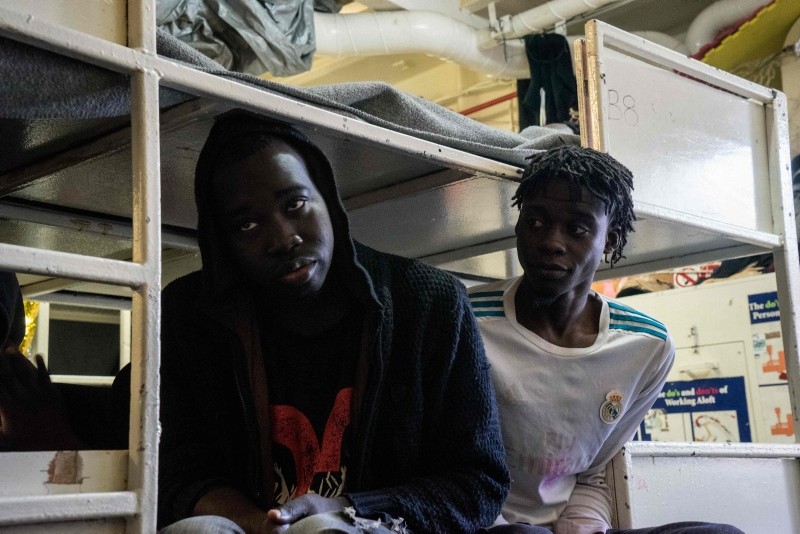 Rescued migrants sit in a closed area normally reserved to women and children, onboard the Dutch-flagged rescue vessel Sea Watch 3 on January 5, 2019, sailing the Mediterranean about 3 nautical miles off Malta's coast (AFP Photo)
by Jan 06, 2019 12:00 am

Some of the 49 migrants stranded off Malta have stopped eating and others are being treated for dehydration, the captain of the NGO rescue vessel Sea-Watch 3 said on Sunday evening. The migrants remain in limbo with no EU country offering refuge.

Speaking via telephone during a news conference in Valletta, Anne-Paul Lancel said the situation on board had become unbearable.

Sea-Watch activists picked up 32 people in distress at sea shortly before Christmas, and a vessel operated by the Sea-Eye organization picked up an additional 17 at the end of December.

"We are not taking them to Libya," he insisted.

Spokeswoman Georgia Linardi told reporters the vessel was currently at double its capacity and the rescued migrants were being held on board in one room.

"The boat was rocking, they were throwing up on each other... This is the worst case scenario," she said.

Pope Francis has waded into the conflict over the two migrant rescue ships operated by German non-governmental organizations (NGOs).

"I extend a sombre appeal to the European heads of state and government, that they show concrete solidarity in dealing with these people," he said on Sunday after the Angelus prayer on St Peter's Square.

The pope's appeal appeared to fall on deaf ears.

Maltese Prime Minister Joseph Muscat said on Sunday he did not want to set a precedent by letting in the migrants, insisting it would risk turning Malta into a Mediterranean disembarkation centre for refugees stuck at sea.

During an interview on One Radio, Muscat said Malta should not be held responsible for those rescued outside its waters.