'I did what Rome asked me to do,' French cardinal says at pedophilia cover-up trial 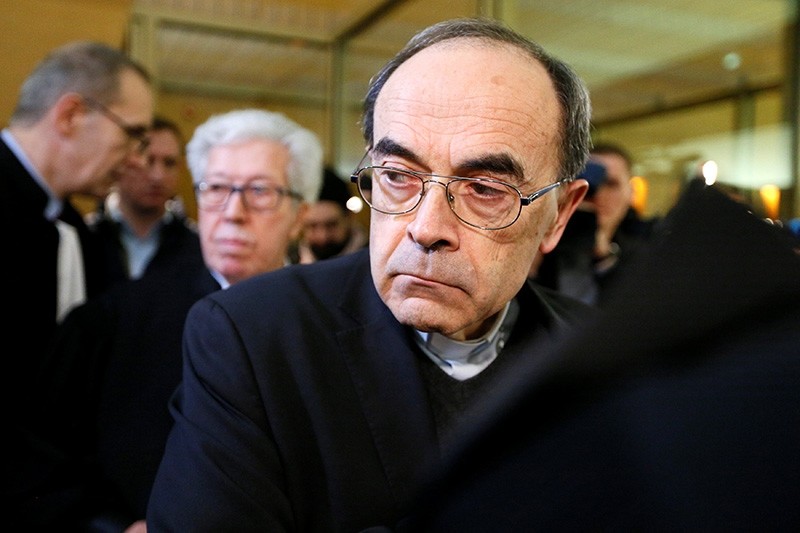 Cardinal Philippe Barbarin, Archbishop of Lyon, arrives to attend his trial, charged with failing to act on historical allegations of sexual abuse of boy scouts by a priest in his diocese, at the courthouse in Lyon, Jan. 7, 2019. (Reuters Photo)
by Daily Sabah with AFP Jan 07, 2019 12:00 am

The most senior French Catholic cleric to stand trial over one of the pedophilia scandals that have rocked the church denied in court Monday covering up for a priest who abused boy scouts in the 1980s and 90s and said he followed the Vatican's orders.

Cardinal Philippe Barbarin, archbishop of Lyon, southeastern France, is accused along with five others from his diocese of failing to report a priest under his responsibility to the authorities.

The 68-year-old bishop, a conservative who has made headlines with his blunt comments in the past, denied the allegations which are the most damaging yet against the church in France.

"I never sought to hide, much less cover up these horrible acts," Barbarin told the court in Lyon, reading from a written statement.

He faces up to three years in prison and a fine of 45,000 euros ($54,000) if convicted of failing to report priest Bernard Preynat or remove him from positions involving care of children. Barbarin denies the allegations.

When asked why he did not remove Preynat until September 2015, despite the Vatican telling him in January to disallow the priest from having contact with children, Barbarin said, "I did what Rome asked me to do."

"They asked me to avoid a public scandal and I acted accordingly," he said, adding, "My authority is Rome."

His former chief of staff Pierre Durieux, who is also on trial, complained in court that the defendants were the subject of a "witchhunt."

Durieux, a former scout, said he had been "particularly moved" by the story of a fellow scout who wrote to the cardinal in 2014 about Preynat.

"Your story could have been mine," he told Alexandre Hezez, one of the nine victims who brought the case to court.

Barbarin has been accused of being deaf to the suffering of abuse victims until they went public from 2015.

He admitted Monday that he had "not always used the best and most tactful words in the past."

After initially saying he first knew about the abuse claims in 2014, he admitted in 2016 to having known about them for nearly a decade.

He caused shock that year by voicing relief that most of the incidents over which Preynat was accused were covered by the statute of limitations, meaning they could no longer be prosecuted -- remarks he called a "language error."

The scandal in Lyon first blew up in 2015 when former scout Francois Devaux went public with allegations that Preynat abused him as a child 25 years earlier.

Speaking shortly before the trial began Devaux, said: "The goal is to stop the same mistakes being repeated."

Devaux filed a police complaint against Barbarin, who has retained the support of Pope Francis.

After six months of investigation and 10 hours of interviews with the cardinal, investigators dropped the case in 2016, saying the allegations against Barbarin were either too old or impossible to prove.

But nine victims succeeded in reopening the probe which led to him and the others, including the now-archbishop of Auch and the bishop of Nevers in France, having to stand trial.

All of them worked in the Lyon diocese at the time of the abuse.

The victims' group, La Parole Liberee (Freed Speech), has gathered testimony from a total of 85 people claiming to have been victims of Preynat in Lyon.

After he was first denounced in 1991, Preynat was prevented from leading scout groups, but he was later allowed to teach children and held positions of authority in parishes until 2015.

He has acknowledged abusing boys and is set to be tried later this year.

Two other French religious figures have been convicted of failing to report child abuse in the past: the archbishop of Bayeux-Lisieux, Pierre Rican, in 2001, and the former bishop of Orleans, Andre Fort, last year.

The head of the Vatican's powerful Congregation for the Doctrine of the Faith, Spanish Archbishop Luis Francisco Ladaria Ferrer, has also been accused of complicity in the alleged Lyon cover-up.

In correspondence with Barbarin about the priest, the Vatican's number three advised the cardinal to take "necessary disciplinary measures while avoiding public scandal" -- seen as a warning to keep the abuse quiet.

The Vatican has cited his immunity from prosecution and he will not go on trial.

The Catholic Church has been roiled in recent years by claims against priests which have come to light in the wake of a global move by victims to go public with evidence.

Clerics have been denounced in countries as far afield as Australia, Brazil, Chile, Ireland, and the United States, leading Pope Francis to promise to rid the church of a scourge that has done enormous damage to its standing.