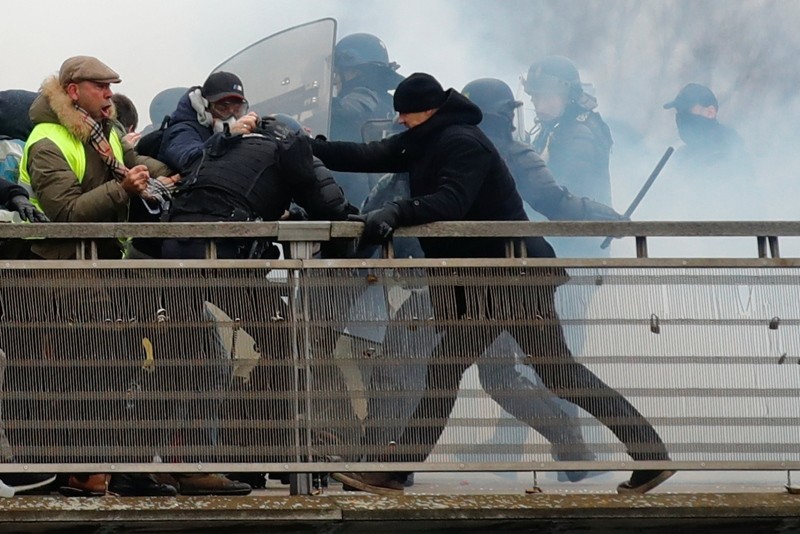 Former French boxer Christophe Dettinger, the one with the black beaine, seen during clashes with Gendarmerie as part of a demonstration by the ,yellow vests, on the passerelle Leopold-Sedar-Senghor bridge in Paris, France, January 5, 2019. (Reuters)
by Compiled from Wire Services Jan 08, 2019 12:00 am

French officials on Tuesday condemned a fundraising drive that brought in more than 100,000 euros for a former boxer filmed punching police officers during the latest "yellow vest" anti-government protests in Paris over the weekend.

Christophe Dettinger, known as "The Gypsy From Massy" during his days in the ring, turned himself in to police on Monday after videos emerged of him assaulting shield-carrying officers during the demonstrations on Saturday.

In a video posted on YouTube on Sunday, he described himself as an "ordinary citizen" acting out of anger with what he called the repressive tactics of the police.

"I was tear-gassed, with my friend and my wife, and at a certain point the anger just rose up inside me," said the 2007 and 2008 champion of France's light heavyweight division.

His case garnered many pledges of support on social media, with some calling him a hero for defending a movement which has accused police of using excessive force against demonstrators.

But government officials assailed the fundraising drive, with many calling for it to be shut down or for the pledged funds to be seized.

"To what level of hate have we sunk to in the public sphere that people fund gratuitous violence against someone charged with upholding public order?", Equality Minister Marlene Schiappa told France Info radio Tuesday.

"Apparently, hitting a policeman is a nice earner," Mounir Mahjoubi, France's junior technology minister, wrote on Twitter. "Everybody must act responsibly: This fundraiser is a disgrace."

The SCSI-CFDT police union said the funds should be used to compensate the two officers targeted by Dettinger, who were removed from duty while recovering from their injuries.

Leetchi initially defended its hosting of the fundraising, saying it was simply a "neutral" online platform.

But on Tuesday it stopped displaying the amount pledged, before closing the fundraiser "in light of the amount raised" after more than 8,100 pledges.

"Christophe and his family are sincerely touched by your generosity... and as he says, 'the fight continues!'," an administrator of the fund-raising effort wrote on the site.

Leetchi did not reveal how much was raised in total, but said that it would ensure the funds "will be used only to pay for legal costs" and that any money left over would be returned to donors.

"In no way do we make judgements or take any stance whatsoever on the value of a theme, cause or project," it added.

The yellow vest movement, originally against fuel tax hikes, has snowballed into a wide protest against the rising cost of living, which prompted Macron's government to announce a minimum wage hike and other financial relief.