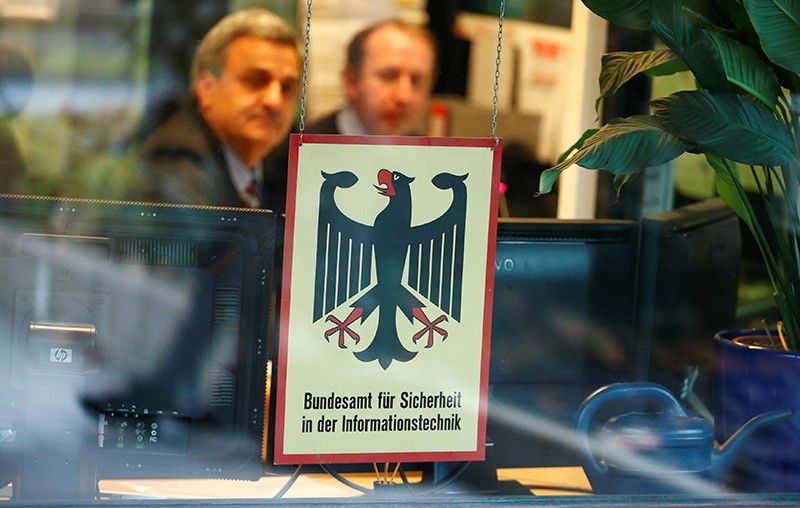 Security personnel sits behind the bullet-proof window at the headquarters of Germany's BSI national cyber defense body in Bonn, Germany, Jan. 4, 2019. (Reuters Photo)
by Compiled from Wire Services Jan 08, 2019 12:00 am

German authorities said Monday a man has been detained in a suspected hacking case that resulted in the private information of hundreds of politicians, including Chancellor Angela Merkel, and celebrities being posted online.

The Federal Criminal Police Office said Tuesday that they searched the apartment of a 20-year-suspect from central Hesse state on Sunday and detained him.

Der Spiegel reported on its website that the 20-year-old had confessed. It quoted an investigator as saying the suspect had not been aware of the scale of the effect of his actions, and so far nothing pointed to any link to foreign security agencies.

Interior Minister Horst Seehofer is set to give a 2 p.m. (1300 GMT) press conference on the matter.

Germany's political establishment was rocked on Friday with the news that private phone numbers, photos and online message transcripts had been released online bit by bit on Twitter throughout December. German authorities are under fire for their handling of the breach.

Authorities have said that almost 1,000 people were affected by the data breach. In most cases, the information made public was limited to basic contact details, but in up to 60 cases more extensive personal data was published.

The information appeared to include data on members of all parties in parliament except those from the far-right Alternative for Germany party.

It was unclear whether the arrest was connected to the search of an apartment on Sunday of a 19-year-old IT worker in the southern city of Heilbronn. The teenager, Jan Schuerlein, said on Twitter he was being treated as a witness in the investigation and was cooperating with the police.

The breach has prompted calls for a tightening of data security laws, especially after the BSI cyber defense agency said it had been contacted by a lawmaker in early December about suspicious activity on private email and social media.